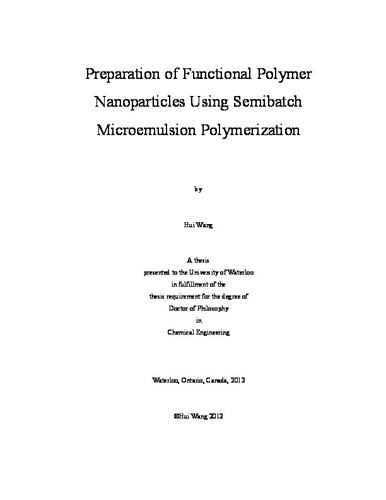 The present project is related to two aspects of research (i) to develop a new technique to synthesize fine nano-size polymer particles with unique and controllable properties; (ii) to synthesize novel functional polymer nanoparticles aiming to overcome the central challenge that has limited the commercialization of green latex hydrogenation, i.e. the optimal interplay of accelerating the hydrogenation rate, decreasing the required quantity of catalyst, and eliminating the need for an organic solvent. Focusing on these two objectives stated above, the following studies were carried out. (1) Development of Micellar Nucleation Mechanism for Preparation of Fine Polymer Nanoparticles. Polymer nanoparticles below 20 nm with a solid content of more than 13 wt% and a narrow molecular weight polydispersity (~1.1) were prepared using a micellar nucleation semibatch microemulsion polymerization system emulsified by sodium dodecyl sulfate (SDS), with SDS/monomer (methyl methacrylate) and SDS/H2O weight ratios of up to 1:16 and 1:100, respectively. It was found that for benzoyl peroxide (BPO), micellar nucleation is more favorable for the synthesis of smaller polymer nanoparticles than ammonium persulfate (APS), which gives rise to homogeneous nucleation and 2,2'-azobisisobutyronitrile (AIBN), which involves partially heterogeneous nucleation. In the polymerization process, there exists a critical stability concentration (CSC) for SDS, above which the size of the nanoparticles is to be minimized and stabilized. With an increase in the monomer addition rate, the polymerization system changes from a microemulsion system to an emulsion system. A mechanism was proposed to describe the micellar nucleation process of semibatch microemulsion polymerization. This technique will pioneer a significant new way to use a simple but practical method to synthesize narrow PDI polymers, which is a very meaningful new development. (2) Diene-Based Polymer Nanoparticles: Preparation and Direct Catalytic Latex Hydrogenation. At the first stage of this study, poly(butadiene-co-acrylonitrile) nanoparticles were synthesized in a semibatch microemulsion polymerization system using Gemini surfactant trimethylene-1,3-bis (dodecyldimethylammonium bromide), referred to as GS 12-3-12, as the emulsifier. The main characteristic of this GS emulsified system lies in that the decomposition rate of initiator was increased considerably at a low reaction temperature of 50 °C because of the acidic initiation environment induced by GS 12-3-12. The particle size can be controlled by the surfactant concentration and monomer/water ratio and a particle size below 20 nm can be realized. The obtained latex particles exhibit a spherical morphology. The microstructure and copolymer composition of the polymer nanoparticles was characterized by FT-IR and 1H NMR spectroscopy. The effects of the surfactant concentration on the particle size, Zeta-potential, polymerization conversion, copolymer composition, molecular weight, and glass transition temperature (Tg) were investigated. The kinetic study of the copolymerization reaction was carried out, which indicated that an azeotropic composition was produced. The relationship between Tg and number-average molecular weight can be well represented by the Fox-Flory equation. Finally, the semibatch process using conventional single-tail surfactant SDS was compared. In the second stage of this study, the prepared unsaturated nanoparticles were employed as the substrates for latex hydrogenation in the presence of Wilkinson’s catalyst, i.e., RhCl(P(C6H5)3)3. The direct catalytic hydrogenation of poly(butadiene-co-acrylonitrile) nanoparticles in latex form was carried out under various experimental conditions in the presence of Wilkinson’s catalyst without the addition of any organic solvents. In order to appreciate the important factors which influence the nature and extent of this type of hydrogenation, the effects of particle size within the range from 17.5 to 42.2 nm, temperature from 90 to 130 °C, and catalyst concentration from 0.1 to 1.0 wt% (based on the weight of polymer) on the hydrogenation rate were fully investigated. The kinetics study shows that the reaction is chemically controlled with a fairly high apparent activation energy, which is calculated to be between 100 and 110 kJ/mol under the experimental conditions employed. Mass transfer of both hydrogen and catalyst involved in the reaction system was discussed. The analysis of mass transfer of reactants coupled with the reaction kinetics indicated that the catalysis of hydrogenation proceeds at the molecular level. The competitive coordination of the active catalyst species RhH2Cl(PPh3)2 between the carbon-carbon unsaturation and the acrylonitrile moiety within the copolymer was elucidated based on the reaction kinetics of the hydrogenation. (3) Poly(methyl methacrylate)-poly(acrylonitrile-co-butadiene) (PMMA-NBR) Core-Shell Polymer Nanoparticles: Preparation and Direct Catalytic Latex Hydrogenation. PMMA-NBR core-shell structured nanoparticles were prepared using a two stage semibatch microemulsion polymerization system with PMMA and NBR as the core and shell respectively. The GS 12-3-12 was employed as the emulsifier and found to impose a pronounced influence on the formation of the core-shell nanoparticles. A spherical morphology of the core-shell nanoparticles was observed. It was found that there exists an optimal MMA addition amount which can result in the minimized size of PMMA-NBR core-shell nanoparticles. The formation mechanism of the core-shell structure and the interaction between the core and shell domains was illustrated. The PMMA-NBR nano-size latex can be used as the substrate for the following direct latex hydrogenation catalyzed by Wilkinson’s catalyst to prepare the PMMA-HNBR core-shell nanoparticles. The hydrogenation rate is rapid. In the absence of any organic solvent, the PMMA-HNBR nanoparticles with a size of 30.6 nm were obtained within 3 h using 0.9 wt% Wilkinson’s catalyst at 130 °C under 1000 psi of H2. This study provides a new perspective in the chemical modification of NBR and shows promise in the realization of a "green" process for the commercial hydrogenation of unsaturated elastomers.