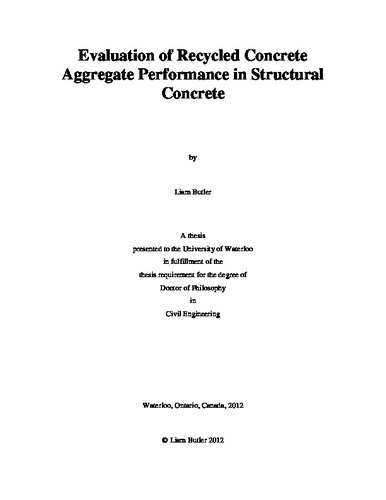 Sustainable resource management and development have been at the forefront of important issues concerning the construction industry for the past several years. Specifically, the use of sustainable building materials and the reuse and recycling of previously used building materials is gaining acceptance and becoming common place in many areas. As one of the most commonly used building materials in the world, concrete, composed of aggregate, sand, cement and water, can be recycled and reused in a variety of applications. Using crushed concrete as fill and subgrade material under roads, sidewalks and foundations has been the most common of these applications. However, research has been ongoing over the past 50 years in many countries including Germany, Canada, Japan, the United States, China, and Australia investigating the use of crushed concrete from demolished old concrete structures to fully or partially replace the virgin aggregate used to produce new concrete for use in building and pavement applications. Producing concrete using recycled concrete aggregates (RCAs) has several advantages, namely, the burden placed on non-renewable aggregate resources may be significantly decreased, the service life and capacity of landfill and waste management facilities can be extended, and the carbon dioxide emissions and traffic congestion associated with the transport of virgin aggregates from remote sites can be reduced. This research is directed at benchmarking typical RCA sources for usage in structural concrete and investigating the inter-relationships between aggregate properties, concrete properties and the bond properties between reinforcing steel and RCA concrete. The experimental program focused on four main areas: aggregate properties testing, development of concrete mixture proportions, concrete fresh and hardened properties testing, and beam-end bond testing. Four coarse aggregate sources were investigated including one virgin or natural aggregate (NA) source, and three RCA sources. Two RCA sources were derived from the crushing of decommissioned building and pavement structures (RCA-1 and RCA-2) while the third source was derived from the crushing of returned ready-mix concrete (RCA-3). A variety of typical and non-typical aggregate tests were performed to provide a basis for correlation with fresh and hardened concrete properties results. A total of 24 concrete mixtures were developed and divided into three separate categories, 1) control, 2) direct replacement, and 3) strength-based mixtures. The control mixtures were proportioned to achieve compressive strengths of 30, 40, 50 and 60MPa with slump values between 75 and 125 mm and served as a basis for comparison with the RCA concrete mixtures. The direct replacement mixtures were developed to investigate the effect that fully replacing (i.e., 100% replacement by volume) virgin coarse aggregate with RCA has on the fresh and hardened properties of the resulting concrete. The strength-based mixtures were developed to investigate the influence of aggregate properties on reinforcement bond in concrete having the same compressive strength. In addition, two separate experimental phases were carried out which had varying compressive strength ranges, different RCA sources, and different suppliers of the same type GU cement. Concrete properties such as slump, compressive strength, splitting tensile strength, modulus of elasticity, Poisson’s ratio, linear coefficient of thermal expansion (LCTE), modulus of rupture and fracture energy were all measured. In total, 48 beam-end specimens were tested that incorporated three bonded lengths (125, 375, and 450 mm) and four concrete compressive strengths (30, 40, 50 and 60 MPa). Based on the results of the aggregate testing it was found that concrete incorporating pre-soaked (i.e., fully saturated) RCA as a 100% replacement for natural aggregate had slump values between 22% and 75%, compressive strengths between 81% and 137%, splitting tensile strengths between 78% and 109%, modulus of elasticity values between 81% and 98%, LCTE values in the same range, flexural strengths between 85% and 136%, and fracture energies between 68% and 118%, of the equivalent control (natural aggregate) concrete mixture. Overall, reductions in bond strength between natural aggregate and RCA concrete ranged between 3 and 21%. The strength of coarse aggregate as quantified by the aggregate crushing value (ACV) was found to be the most significant aggregate property for influencing bond strength. A regression model (based on the beam-end specimens test results) was developed to extrapolate the experimental development lengths as a function of f’c1/4 and ACV. The model, while not intended for use as a design equation, predicted that the required development lengths for the RCA concrete tested as part of this research study were up to 9% longer as compared to the natural aggregate concrete. A detailed flowchart of the various inter-relationships between aggregate properties, concrete properties and reinforced concrete bond properties was compiled based on the results of this research. A comprehensive guideline for use of RCA in concrete was developed based on the findings of this research. It includes a systematic decision tree approach for assessing whether a particular RCA source can be categorized into one of three performance classes. The range of allowable applications of a concrete which incorporates the RCA source as replacement of natural coarse aggregate will depend on the RCA performance class.