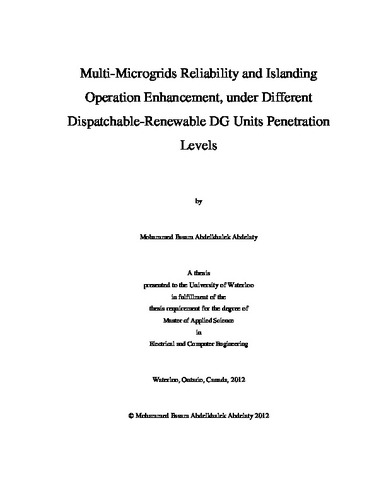 Electrical reliability assurance is a very important aspect of electrical power systems; significant consideration should be given to reliability at both the planning and operation stage of power systems. A decrease in reliability levels can lead to enormous economic losses, especially for certain industrial facilities, and utilities could be penalized for violation of the mandatory reliability standards. Besides the traditional methods for electrical reliability enhancement, it is highly recommended to consider the adoption of innovative technologies, such as the integration of Distributed Generation (DG) units into the electrical network, especially those which are based on renewable energy source (wind and photovoltaic). Distributed Generation technologies can be beneficial to the electrical distribution system performance. However, these pose certain technical challenges to the reliable operation of the system. In this work, we also focus on the micro-grid operation security during islanding mode of operation in the presence of DG units. In this thesis, the unique aspects of reliability evaluation for an electrical distribution system has been performed using system-independent analytical expressions, considering probabilistic load and DG unit modeling, under different scenarios including dispatchable and renewable DG units with reasonable penetration levels. Further, a modified adequacy formulation has been adopted during the islanding mode of operation in order to consider micro-grid load correlation and an additional load curtailment level introduced in this work. The extra curtailment is needed to ensure adequate technical constraints and allow successful micro-grid operation, when the dispatchable DG units rating in a micro-grid is less than a defined percentage of the micro-grid peak load at time of islanding. Afterwards, during islanding, a second load curtailment level is adopted as needed to ensure service continuity under different operational conditions. A distribution test system is considered, and accordingly reliability indices are evaluated for both the worst case load scenario (islanding occurs at peak load), and for a realistic case (islanding might occur at any load level). Further, Expected Energy Not Served is evaluated. In conclusion, the impacts of DG units and islanded operation of micro-grids have been analyzed for the enhancement of the overall reliability of the distribution system and the successful islanding mode of operational conditions.