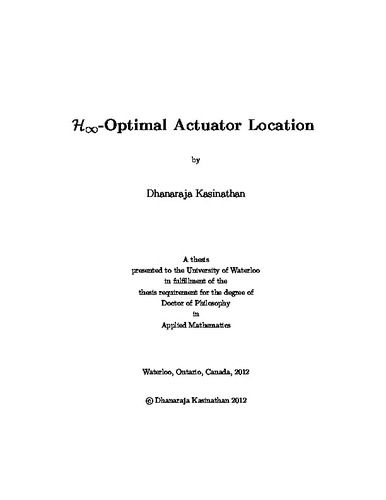 There is often freedom in choosing the location of actuators on systems governed by partial differential equations. The actuator locations should be selected in order to optimize the performance criterion of interest. The main focus of this thesis is to consider H-∞-performance with state-feedback. That is, both the controller and the actuator locations are chosen to minimize the effect of disturbances on the output of a full-information plant. Optimal H-∞-disturbance attenuation as a function of actuator location is used as the cost function. It is shown that the corresponding actuator location problem is well-posed. In practice, approximations are used to determine the optimal actuator location. Conditions for the convergence of optimal performance and the corresponding actuator location to the exact performance and location are provided. Examples are provided to illustrate that convergence may fail when these conditions are not satisfied. Systems of large model order arise in a number of situations; including approximation of partial differential equation models and power systems. The system descriptions are sparse when given in descriptor form but not when converted to standard first-order form. Numerical calculation of H-∞-attenuation involves iteratively solving large H-∞-algebraic Riccati equations (H-∞-AREs) given in the descriptor form. An iterative algorithm that preserves the sparsity of the system description to calculate the solutions of large H-∞-AREs is proposed. It is shown that the performance of our proposed algorithm is similar to a Schur method in many cases. However, on several examples, our algorithm is both faster and more accurate than other methods. The calculation of H-∞-optimal actuator locations is an additional layer of optimization over the calculation of optimal attenuation. An optimization algorithm to calculate H-∞-optimal actuator locations using a derivative-free method is proposed. The results are illustrated using several examples motivated by partial differential equation models that arise in control of vibration and diffusion.