Weather and Camping in Ontario Parks 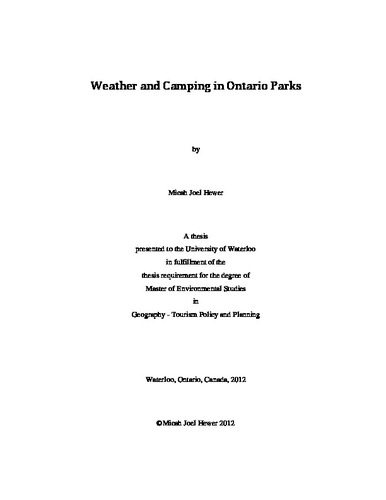 Climate and weather have a major influence over seasonality in nature-based tourism by determining the availability and quality of certain outdoor recreational activities (Butler, 2001). Climate and weather act as central motivators involved in the travel decisions of tourists (Mintel International Group, 1991; Kozak, 2002). Climate as an attraction is also an integral component considered in destination choice among tourists (Lohmann and Kaim, 1999; Hamilton and Lau, 2005; Gössling et al. 2006). Due to the relationship between climate, weather and outdoor recreation, climate change is expected to have a direct impact on park visitation and camper decision-making (Jones and Scott, 2006a; 2006b). This study contributes to the understanding of weather sensitivity for different tourism segments across varying climate zones world-wide which can contribute to more informed park tourism planning and climate change adaptation in Ontario. Using a survey-based approach, this study identified and compared the stated weather preferences and weather related decision-making of campers from two different provincial parks in Ontario. The two provincial parks selected as case studies, based on differing park characteristics and perceived climatic requirements, were Pinery and Grundy Lake. Statistically significant differences (at the 95 percent confidence level) were observed in stated weather preferences and weather related decision-making, based on differences in respondent characteristics. Most notably, activity participation, length of planned stay and age of the respondent had the most significant and widespread effect on weather preferences and camper decision-making. Temperature preferences between the two parks were strikingly similar. However, differences in weather related decision-making were statistically significant showing campers at Pinery to be more sensitive to weather than those at Grundy Lake. Overall, parks that are more beach-oriented, closer to tourism generating areas and are characterised by visitors with shorter than average lengths of stay, are likely to be the most sensitive to weather variability. As such, it will be most important for parks that rely on similar tourism generating markets and share similar park characteristics as Pinery, to place a greater planning emphasis on climate change adaptation, as these parks are likely to be most affected by the impact of climate change on park visitation in Ontario. Climatic warming was not perceived by campers as a major threat to park visitation in Ontario. Instead, heavy rain, strong winds and unacceptably cool temperatures were the most influential weather variables in relation to camper decision-making. In response to the perceived threat of heavy rain and strong winds to camping in Ontario, and in association with projected increases pertaining to the frequency and intensity of these weather events under climate change, a number of recommendations have been made, which could be implemented by Ontario Parks in an effort to reduce camper vulnerability to extreme weather and improve overall trip satisfaction.