Mechanisms of the Aging-Related Positivity Effect in Memory and Attention 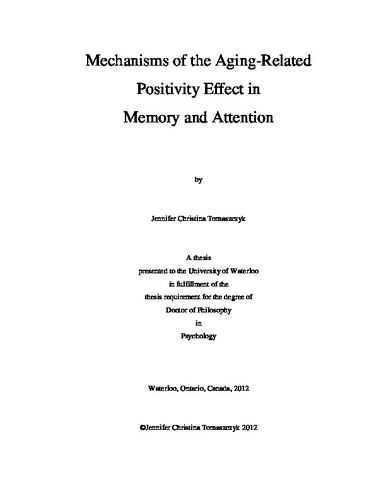 According to the Socioemotional Selectivity Theory (SST), the normal aging process is associated with a greater emphasis on self-regulation of emotional states, and this fosters a bias in cognitive processing for information that is positively valenced (e.g., pleasant images and autobiographical events, happy faces), such that older adults have better memory for, and pay greater attention to, positive relative to negative valenced information (a “positivity effect”). Two hypotheses have recently emerged which differ in the cognitive mechanism proposed to account for the emergence of aging-related positivity effects. The first, termed the “cognitive control” hypothesis, suggests that positivity effects arise from older adults' directed application of cognitive efforts to preferentially process positive information, essentially a top-down explanation. The second is a bottom-up hypothesis, suggesting that positive information is relatively easier (more fluent) for older adults to detect and process, compared to negative information, due to changes in amygdala reactivity to negative stimuli, and is termed the "processing fluency" hypothesis. To evaluate these hypotheses, I conducted a suite of memory and attention experiments and compared performance of younger and older adults. I used five different tasks (three different memory tasks, and two different attention tasks) which varied with respect to the degree to which each allowed for the use of cognitive control, and was reflective in nature, or emphasized fluency (i.e., speed of processing and output). In Experiments 1 and 2, I examined the effect of age on two different types of memory task that differed with respect to the degree to which participants must rely on cognitive control/reflective processing or processing fluency to successfully complete the task. Clear positivity effects were found on the task that was reflective in nature (autobiographical memory task) but not on the task that relied more heavily on fluency (phonemic fluency task). In Experiment 3, I examined whether older adults strategically select positive information to later remember (i.e., use cognitive control to regulate encoding of positive material), by asking participants to judge the likelihood of remembering positive, negative, and neutral pictures for a later memory test. In line with a strategic bias, older, but not younger, adults showed a positivity effect in terms of the number of pictures selected as particularly memorable, though both age groups showed a positivity effect in picture recall. Within the domain of attention-based tasks, in Experiments 4a and 4b I used a Rapid Serial Visual Presentation (RSVP) paradigm to examine whether older adults were more likely to detect (or have attention captured by) rapidly presented positive, than negative or neutral, pictures compared to younger adults. Given the rapid rate of presentation in this paradigm, it is unlikely that participants would be able to use cognitive control to strategically direct attention to positive stimuli, thus performance was taken to measure fluency-mediated biases for the pictures of different valence. Results showed little evidence for a positivity effect. In Experiments 5a and 5b, again within the domain of attention, I examined whether older adults preferentially oriented attention toward positive, and/or away from negative, relative to neutral stimuli, on a dot probe task in which trial timings were long enough to allow for strategic control. Experiment 5a used faces whereas Experiment 5b used pictures as stimuli, in an effort to determine whether findings could generalize across different types of stimuli. Some evidence of positivity effects were found, as older adults were less biased to attend to negative (angry) faces compared to younger adults. Results across this series of experiments are consistent with the hypothesis that positivity effects in older adults' memory and attention stem from the strategic application of effortful, reflective, cognitive processing, rather than a bottom-up difference in processing fluency.