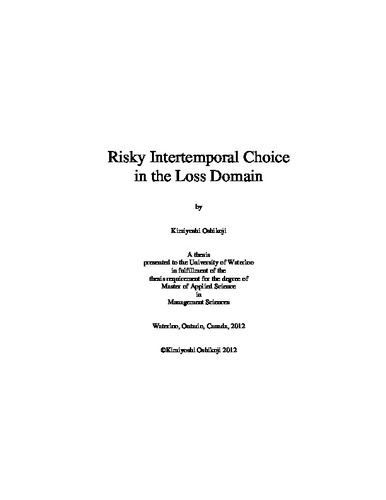 Risky intertemporal choice is a fairly new topic in the realm of behavioral economics that involves examining the interactions between individuals’ time and risk preferences. Previous research has looked at the gains and mixed domain, but little to no research has been done in the loss domain. This study aims to fill this gap by examining how people respond to risky gambles in the loss domain given real world time delays. The thesis focuses on changes in attitudes towards risk caused by temporal distance rather than how people discount risky prospects. Based on Construal Level Theory we predict that there will be a greater focus on outcomes over probabilities in delayed gambles compared to immediate ones, and hence, individuals will become more risk-averse for delayed gambles that are in the loss domain. We conducted two experiments to test this prediction. Results revealed that while subjects in the immediate resolution group were significantly more risk-seeking than future resolution groups in both experiments, the difference in risk attitudes between two delayed resolutions depend on how big the difference between two delays is.