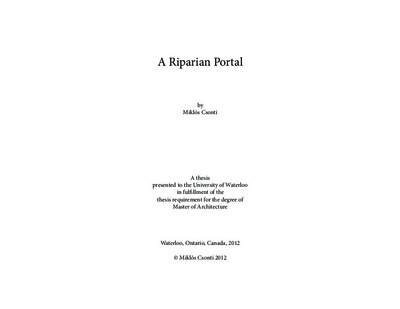 Modernization and its conveniences have obscured our relationship with the natural environment. We no longer have to personally interact with nature when consuming its resources. Consequently, we lack direct feedback from our exploits, and have lost any moral sensibility towards the finite resources of our planet. This unwanted consequence of modernity has perhaps most explicitly manifested itself on the urban riverbanks of the developed world. Such riparian landscapes, once animated with human activity, have become desolate environments, often programmed solely to serve utilitarian functions. At best, some have been revitalized to accommodate recreational amenities, but the direct interaction that was once necessary to utilize the river for its resources has been replaced by invisible machinery, turning the river’s role in sustaining the city into an abstract concept. The condition found on the banks of the Danube River in Budapest is the epitome of this unfortunate phenomenon. While inhabitants draw water from the faucet, buy fish in the supermarket, and expel waste into an enigmatic drain, the riverbank is far out of sight, deserted, and the river’s role in satisfying their needs is never considered. Instead, the Danube is revered only for the pomp and grandeur it bestows upon the extravagant portrait of the boastful city. In response to this skewed perception, this thesis presents a proposal on the site of Széchenyi Square, located at the base of the Chain Bridge in the heart of Budapest. Historically significant as the main port and gateway to the merchant town of Pest, the Square has since abandoned its role as mediator between city and river, and has instead become a mediator of automotive traffic. The proposal presented in this thesis revives its role as a gateway, but not in the traditional sense. It conceives a riparian portal that allows the passer-by to experience an alternate reality – a place where nature and city are superimposed, and the modern individual is granted direct interaction with his natural resources.