Pick Interpolation and the Distance Formula 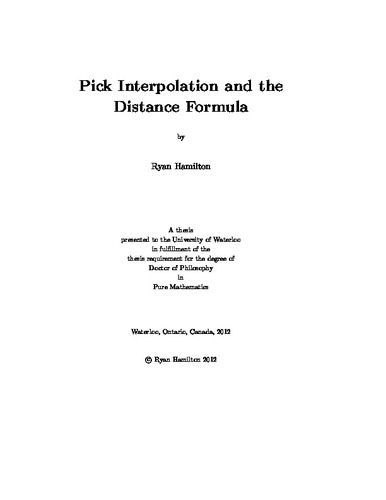 The classical interpolation theorem for the open complex unit disk, due to Nevanlinna and Pick in the early 20th century, gives an elegant criterion for the solvability of the problem as an eigenvalue problem. In the 1960s, Sarason reformulated problems of this type firmly in the language of operator theoretic function theory. This thesis will explore connections between interpolation problems on various domains (both single and several complex variables) with the viewpoint that Sarason’s work suggests. In Chapter 1, some essential preliminaries on bounded operators on Hilbert space and the functionals that act on them will be presented, with an eye on the various ways distances can be computed between operators and a certain type of ideal. The various topologies one may define on B(H) will play a prominent role in this development. Chapter 2 will introduce the concept of a reproducing kernel Hilbert space, and a distinguished operator algebra that we associate to such spaces know as the multiplier algebra. The various operator theoretic properties that multiplier algebras enjoy will be presented, with a particular emphasis on their invariant subspace lattices and the connection to distance formulae. In Chapter 3, the Nevanlinna-Pick problem will be invested in general for any repro- ducing kernel Hilbert space, with the basic heuristic for distance formulae being presented. Chapter 4 will treat a large class of reproducing kernel Hilbert spaces associated to measure spaces, where a Pick-like theorem will be established for many members of this class. This approach will closely follow similar results in the literature, including recent treatments by McCullough and Cole-Lewis-Wermer. Reproducing kernel Hilbert spaces where the analogue of the Nevanlinna-Pick theorem holds are particularly nice. In Chapter 5, the operator theory of these so-called complete Pick spaces will be developed, and used to tackle certain interpolation problems where additional constraints are imposed on the solution. A non-commutative view of interpola- tion will be presented, with the non-commutative analytic Toeplitz algebra of Popescu and Davidson-Pitts playing a prominent role. It is often useful to consider reproducing kernel Hilbert spaces which arise as natural products of other spaces. The Hardy space of the polydisk is the prime example of this. A general commutative and non-commutative view of such spaces will be presented in Chapter 6, using the left regular representation of higher-rank graphs, first introduced by Kribs-Power. A recent factorization theorem of Bercovici will be applied to these algebras, from which a Pick-type theorem may be deduced. The operator-valued Pick problem for these spaces will also be discussed. In Chapter 7, the various tools developed in this thesis will be applied to two related problems, known as the Douglas problem and the Toeplitz corona problem.