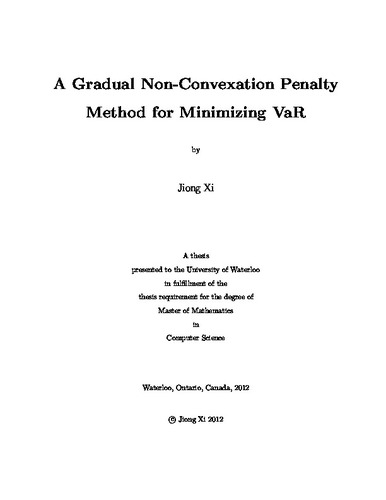 This thesis investigates the portfolio optimization problem using Value-at-Risk (VaR) as a risk measure, when m sample scenarios are given. Minimizing VaR of a portfolio is computationally difficult: it is non-convex, non-smooth, and has many local minima. Recently Gaivoronski and Pflug define a quantile-based smoothed VaR function to approximate the original VaR; this smoothed VaR function is then minimized to obtain the minimal VaR portfolio. Unfortunately this method suffers two problems. Firstly, computational cost of minimization is high since each function evaluation requires O(m^3) work, where m is the number of scenarios. Secondly, it is difficult to determine the smooth parameter. We propose a new gradual non-convexation penalty method which can efficiently solve a VaR minimization problem. We first introduce an auxiliary variable and formulate the VaR minimization problem as an optimization problem with a probabilistic constraint, which involves a sum of step functions. A continuously differentiable piecewise quadratic function is used to approximate the step function. An exact penalty method is used to solve the constrained optimization problem. In an attempt to reach the global minimize, we also use a gradual non-convexation process with the initial problem close to a convex problem. The solution of the kth optimization problem is used as the starting point of the k+1th problem. As the indexing parameter increases, the problem becomes non-convex. Our new method has three advantages. Firstly, our formulation is structurally simpler. Secondly, our method has three computationally more efficient since each function evaluation requires O(m) work. Thirdly, we use a gradual non-convexation process in an attempt to track the global minimum; this also avoids the difficulty in choosing the smooth parameter. Both historical and synthetic data are used to test our VaR minimization method. We compare our method with both Uryasev and Rockafellar’s CVaR minimization method and Gaivoronski and Pflug’s quantile-based smoothed VaR method in terms of VaR, CPU time, and efficient frontiers. We show that our gradual non-convexation penalty method yields better minimal VaR portfolio than the other two methods. In addition, we show that the proposed gradual non-convexation penalty method is computationally much more efficient than Gaivoronski and Pflug’s quantile-based smoothed VaR method, especially when the number of scenarios is large.