Natural and anthropogenic controls of landslides on Vancouver Island 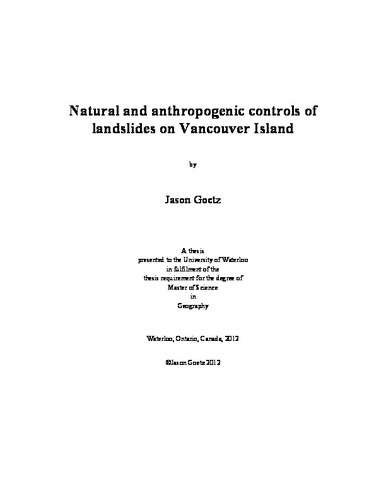 Empirically-based models of landslide distribution and susceptibility are currently the most commonly used approach for mapping probabilities of landslide initiation and analyzing their association with natural and anthropogenic environmental factors. In general, these models statistically estimate susceptibility based on the predisposition of an area to experience a landslide given a range of environmental factors, which may include land use, topography, hydrology and other spatial attributes. Novel statistical approaches include the generalized additive model (GAM), a non-parametric regression technique, which is used in this study to explore the relationship of landslide initiation to topography, rainfall and forest land cover and logging roads on Vancouver Island, British Columbia. The analysis is centered on an inventory of 639 landslides of winter 2006/07. Data sources representing potentially relevant environmental conditions of landslide initiation are based on: terrain analysis derived from a 20-m CDED digital elevation model; forest land cover classified from Landsat TM scenes for the summer before the 2006 rainy season; geostatistically interpolated antecedent rainfall patterns representing different temporal scales of rainfall (a major storm, winter and annual rainfall); and the main lithological units of surface geology. In order to assess the incremental effect of these data sources to predict landslide susceptibility, predictive performances of models based on GAMs are compared using spatial cross-validation estimates of the area under the ROC curve (AUROC), and variable selection frequencies are used to determine the prevalence of non-parametric associations to landslides. In addition to topographic variables, forest land cover (e.g., deforestation), and logging roads showed a strong association with landslide initiation, followed by rainfall patterns and the very general lithological classification as less important controls of landscape-scale landslide activity in this area. Annual rainfall patterns are found not to contribute significantly to model prediction improvement and may lead to model overfitting. Comparisons to generalized linear models (i.e., logistic regression) indicate that GAMs are significantly better for modeling landslide susceptibility. Overall, based on the model predictions, the most susceptible 4% of the study area had 29 times higher density of landslide initiation points than the least susceptible 73% of the study area (0.156 versus 0.005 landslides/km2).