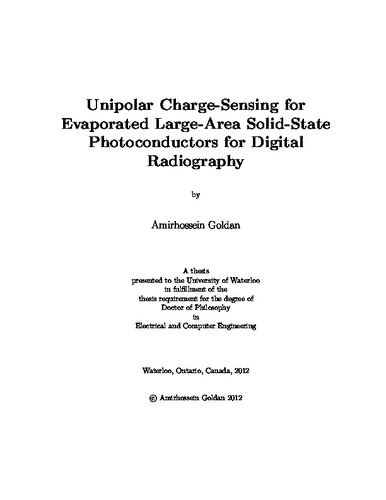 An alternative approach to energy integrating systems is photon counting which provides higher dose efficiency through efficient noise rejection and optimal energy weighting, and, moreover, is not susceptible to memory artifacts such as image lag and ghosting. The first large-area photon counting imager was Charpak's Nobel Prize winning invention of the gas-filled multiwire proportional chamber (MWPC), which revolutionized the field of radiation detection in 1968. In most applications, however, the use of a solid detection medium is preferable because solid densities are about three orders-of-magnitude greater than gas, and thus, they can yield much smaller detector dimensions with unsurpassed spatial and temporal resolution. Thus far, crystalline Cadmium Zinc Telluride is the only room-temperature solid-state detector that meets the requirements for photon counting imaging. However, the material is grown in small ingots and production costs are high for large-area imaging applications. The problem is that disordered (or non-crystalline) solids, which are easier and less expensive to develop over large-area than single crystalline solids, have been ruled out as viable photon counting detectors because of their poor temporal resolution, or more specifically, extremely low carrier mobilities and transit-time-limited photoresponse. To circumvent the problem of poor charge transport in disordered solids with a conventional planar detector structure, we propose unipolar charge sensing by establishing a strong near-field effect using an electrostatic shield within the material. We introduce the concept of time-differential photoresponse in unipolar solids and show that their temporal resolution can be improved substantially to reach the intrinsic physical limit set by spatial dispersion. Inspired by Charpak's MWPC and its variants, and for the first time, we have implemented an electrostatic shield inside evaporated amorphous selenium (a-Se) using the proposed lithography-based microstrip solid-state detector (MSSD). The fabricated devices are characterized with optical, x-ray, and gamma-ray impulse-like excitations. Using optical time-of-flight (TOF) measurements, we show for the first time a unipolar Gaussian TOF transient from the new MSSD structure, instead of a rectangular response with a Gaussian-integral at the tail which is a typical response of a conventional planar device. The measured optical and x-ray TOF results verify the time-differential property of the electrostatic shield and the practicality of the dispersion-limited photoresponse. Furthermore, we use single gamma-ray photon excitations to probe detector's temporal resolution in pulse mode for photon counting. For the MSSD, we show a depth-independent signal for photon absorption across the bulk and a reduction in signal risetime by a factor of 350, comparing performance limiting factors being hole-dispersion for the MSSD and electron-transit-time for the conventional planar device. The time-differential response obtained from the proposed unipolar detector structure enables disordered photoconductive films to become viable candidates for large-area photon counting applications.