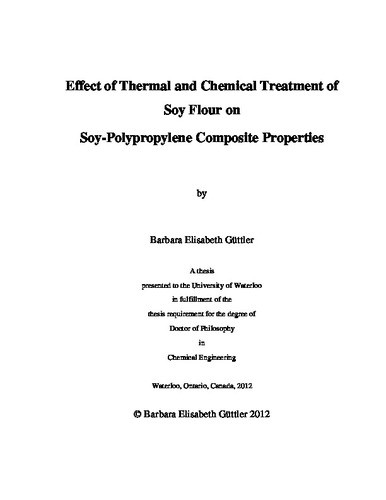 Soy flour (SF), a by-product of the soybean oil extraction processing, was investigated for its application in soy-polypropylene composites for interior automotive applications. The emphasis of this work was the understanding of this new type of filler material and the contribution of its major constituents to its thermal stability and impact properties. For this reason, reference materials were selected to represent the protein (soy protein isolate (SPI)) and carbohydrate (soy hulls (SH)) constituents of the soy flour. Additional materials were also investigated: the residue obtained after the protein removal from the soy flour which was called insoluble soy (IS), and the remaining liquid solution after acid precipitation of the proteins, containing mostly sugars and minerals, which was called soluble sugar extract (SSE). Two treatments, potassium permanganate and autoclave, were analyzed for their potential to modify the properties of the soy composite materials. An acid treatment with sulfuric acid conducted on soy flour was also considered. The soy materials were studied by thermogravimetric analysis (TGA) under isothermal (in air) and dynamic (in nitrogen) conditions. SPI had the highest thermal stability and SSE the lowest thermal stability for the early stage of the heating process. Those two materials had the highest amount of residual mass at the end of the dynamic TGA in nitrogen. The two treatments showed minimal effect on the isothermal thermal stability of the soy materials at 200 °C. A minor improvement was observed for the autoclave treated soy materials. Fourier transformed infrared (FTIR) spectroscopy indicated that the chemical surface composition differed according to type of the soy materials but no difference could be observed for the treatments within one type of soy material. Contact angle analysis and surface energy estimation indicated differences of the surface hydrophobicity of the soy materials according to type of material and treatment. The initial water contact angle ranged from 57 ° for SF to 85 ° for SH. The rate of water absorption increased dramatically after the autoclave treatment for IS and SPI. Both materials showed the highest increase in the polar surface energy fraction. In general, the major change of the surface energy was associated with change of the polar fraction. After KMnO4 treatment, the polar surface energy of SF, IS and SPI decreased while SH showed a slight increase after KMnO4 treatment. A relationship between protein content and polar surface energy was observed and seen to be more pronounced when high protein containing soy materials were treated with KMnO4 and autoclave. Based on the polar surface energy results, the most suitable soy materials for polypropylene compounding are SPI (KMnO4), SH, and IS (KMnO4) because their polar surface energy are the lowest which should make them more compatible with non-polar polymers such as polypropylene. The soy materials were compounded as 30 wt-% material loading with an injection moulding grade polypropylene blend for different combinations of soy material treatment and coupling agents. Notched Izod impact and flexural strength as well as flexural modulus estimates indicated that the mechanical properties of the autoclaved SF decreased when compared to untreated soy flour while the potassium permanganate treated SF improved in impact and flexural properties. Combinations of the two treatments and two selected (maleic anhydride grafted polypropylene) coupling agents showed improved impact and flexural properties for the autoclaved soy flour but decreased properties for the potassium permanganate treated soy flour. Scanning electron microscopy of the fractured section, obtained after impact testing of the composite material, revealed different crack propagation mechanisms for the treated SF. Autoclaved SF had a poor interface with large gaps between the material and the polypropylene matrix. After the addition of a maleic anhydride coupling agent to the autoclaved SF and polypropylene formulation, the SF was fully embedded in the polymer matrix. Potassium permanganate treated SF showed partial bonding between the material and the polymer matrix but some of the material showed poor bonding to the matrix. The acid treated SF showed cracks through the dispersed phase and completely broken components that did not bind to the polypropylene matrix. In conclusion, the two most promising soy materials in terms of impact and flexural properties improvement of soy polypropylene composites were potassium permanganate treated SF and the autoclaved SF combined with maleic anhydride coupling agent formulation.