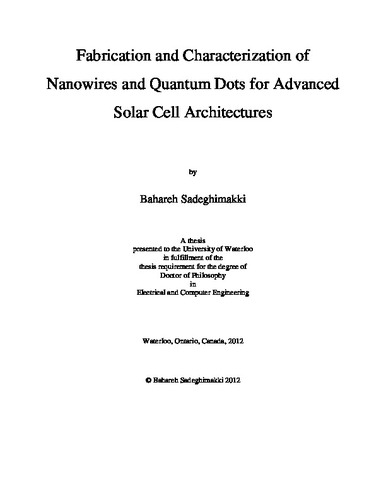 The commercially available solar cells suffer from low conversion efficiency due to the thermalization and transmission losses arising from the mismatch between the band gap of the semiconductor materials and the solar spectrum. Advanced device architectures based on nanomaterial have been proposed and being successfully used to enhance the efficiency of the solar cells. Quantum dots (QDs) and nanowires (NWs) are the nanosclae structures that have been exploited for the development of the third generation solar cell devices and nanowire based solar cells, respectively. The optical and electrical properties of these materials can be tuned by their size and geometry; hence they have great potential for the production of highly efficient solar cell. Application of QDs and NWs with enhanced optoelectronic properties and development of low-cost fabrication processes render a new generation of economic highly efficient PV devices. The most significant contribution of this PhD study is the development of simple and cost effective methods for fabrication of nanowires and quantum dots for advanced solar cell architectures. In advanced silicon nanowires (SiNWs) array cell, SiNWs have been widely synthesised by the well-known vapor-liquid-solid method. Electron beam lithography and deep reactive ion etching have also been employed for fabrication of SiNWs. Due to the high price and complexity of these methods, simple and cost effective approaches are needed for the fabrication of SiNWs. In another approach, to enhance the cell efficiency, organic dyes and polymers have been widely used as luminescent centers and host mediums in the luminescent down shifting (LDS) layers. However, due to the narrow absorption band of the dyes and degradation of the polymers by moisture and heat, these materials are not promising candidates to use as LDS. Highly efficient luminescent materials and transparent host materials with stable mechanical properties are demanded for luminescent down shifting applications. In this project, simple fabrication processes were developed to produce SiNWs and QDs for application in advanced cell architectures. The SiNWs array were successfully fabricated, characterized and deployed in new cell architectures with radial p-n junction geometry. The luminescence down shifting of layers containing QDs in oxide and glass mediums was verified. The silica coated quantum dots which are suitable for luminescence down shifting, were also fabricated and characterized for deployment in new design architectures. Silicon nanowires were fabricated using two simplified methods. In the first approach, a maskless reactive ion etching process was developed to form upright ordered arrays of the SiNWs without relying on the complicated nano-scale lithography or masking methods. The fabricated structures were comprehensively characterized. Light trapping and photoluminescence properties of the medium were verified. In the second approach, combination of the nanosphere lithography and etching techniques were utilized for wire formation. This method provides a better control on the wire diameters and geometries in a very simple and cost effective way. The fabricated silicon nanowires were used for formation of the radial p-n junction array cells. The functionality of the new cell structures were confirmed through experimental and simulation results. Quantum dots are promising candidates as luminescent centers due to their tunable optical properties. Oxide/glass matrices are also preferred as the host medium for QDs because of their robust mechanical properties and their compatibility with standard silicon processing technology. Besides, the oxide layers are transparent mediums with good passivation and anti-reflection coating properties. They can also be used to encapsulate the cell. In this work, ordered arrays of QDs were incorporated in an oxide layer to form a luminescent down shifting layer. This design benefits from the enhanced absorption of a periodic QD structure in a transparent oxide. The down shifting properties of the layer after deployment on a crystalline silicon solar cell were examined. For this purpose, crystalline silicon solar cells were fabricated to use as test platform for down shifting. In order to examine the down-shifting effect, different approaches for formation of a luminescence down shifting layer were developed. The LDS layer consist of cadmium selenide- zinc sulfide (CdSe/ZnS) quantum dots in oxide and glass layers to act as luminescent centers and transparent host medium, respectively. The structural and optical properties of the fabricated layers were studied. The concept of spectral engineering was proved by the deployment of the layer on the solar cell. To further benefit from the LDS technique, quantum efficiency of the QDs and optical properties of the layer must be improved. Demand for the high quantum efficiency material with desired geometry leaded us to synthesis quantum dots coated with a layer of grown oxide. As the luminescence quantum efficiency of the QDs is correlated to the surface defects, one advantage of having oxide on the outer shell of the QDs, is to passivate the surface non-radiative recombination centers and produce QDs with high luminescent quantum yield. In addition, nanoparticles with desired size can be obtained only by changing the thickness of the oxide shell. This method also simplifies the fabrication of QD arrays for luminescence down shifting application, since it is easier to form ordered arrays from larger particles. QD superlattices in an oxide medium can be fabricated on a large area by a simple spin-coating or dip coating methods. The photonic crystal properties of the proposed structure can greatly increase the absorption in the QDs layer and enhance the effect of down shifting.