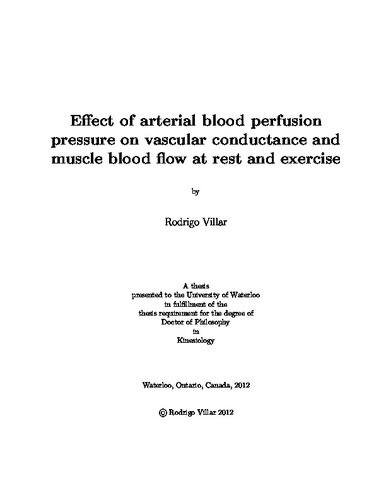 The adaptations of vessel diameter represented by vascular conductance (VC), muscle blood flow (MBF) and oxygen delivery (DO2est) were investigated during rest and exercise using the effects of gravity to manipulate muscle perfusion pressure (MPP) by placing the heart above (head-up tilt) and below (head-down tilt) the level of the muscle. This experimental paradigm was used to explore VC and MBF regulation and related control mechanisms during rest and exercise. Study 1 tested the repeatability of Doppler ultra- sound measurements of muscle blood flow velocity (MBV), arterial diameter, MBF and VC. The adaptations in VC and MBF (Study 2) and changes in anterograde and retro- grade MBV patterns (Study 3) were investigated during postural challenges at rest. Study 4, determined the peak VC and its fractional recruitment during transitions from rest to lower (LPO) and higher power output (HPO) calf muscle exercise in HDT and HUT. Study 5 investigated the combined effects of altered MPP and hypoxia during exercise. During rest-HDT, increases in VC compensated for the MPP reduction to maintain MBF, while in rest-HUT, MBF was reduced. Following the start of LPO and HPO exercises, MBF and VC responses were delayed in HDT and accelerated in HUT. During LPO, MBF steady- state was reduced in HUT compared to horizontal (HOR), while the greater increase in VC during HDT maintained MBF at a similar level as HUT. Post-exercise MBF recovered rapidly in all positions after LPO exercise but did not after HPOHDT. During HPOHDT, MBF was reduced despite the increase in VC, while in HPOHUT MBF was similar to that in HPOHOR. The hypoxic challenge added in exercise was met during LPOHDT by in- creased VC to compensate reduced MPP and O2 availability such that MBF maintained DO2est. However, during HPOHDT in hypoxia, VC reached maximal vasodilatory capacity, compromising MBF and DO2est. Together, these findings indicate that LPOHDT in nor- moxia or hypoxia VC increased to maintain MBF and DO2est, but during HPO functional limitation for recruitment of VC constrained MBF and DO2 in normoxia and hypoxia. Elevated muscle electromyograpic signals in HPOHDT were consistent with challenged aer- obic metabolism. MPP reduction in HDT caused slower adaptation of MBF limiting O2 availability would result in a greater O2 deficit that could contribute to an increase in the relative stress of the exercise challenge and advance the onset of muscle fatigue.