Effects of temperature on the growth of Arctic charr Salvelinus alpinus in Ungava and Labrador, Canada 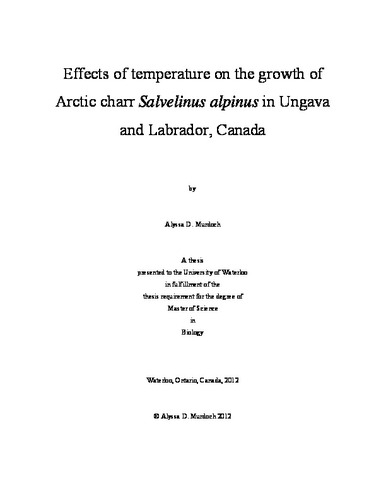 Arctic surface air temperatures have been warming at twice the global rate, making it one of the most susceptible regions to current climate change. Effects on cold-adapted aquatic species, such as the culturally and ecologically important Arctic charr (Salvelinus alpinus), are difficult to anticipate and may vary depending on site-specific attributes. Temperature has a direct influence on aspects of species’ fitness, including growth, reproduction and, ultimately, survival. Previous research on temperature-growth patterns in Arctic charr has yielded variable results, particularly for studies observing these patterns in the wild. Two field-based studies are presented in this thesis, in an attempt to better understand temperature-growth patterns for wild populations of Arctic charr. In the first study, individual measurements of annual, or within-season growth were determined from tag-recaptured Arctic charr and examined in relation to summer sea surface temperatures and within-season capture timing in the Ungava and Labrador regions of eastern Canada. Differences in among-year growth were significant for Ungava Bay Arctic charr, with growth being positively correlated with temperature. Growth of Labrador Arctic charr did not vary significantly among years. Regional comparisons demonstrated that Ungava Arctic charr had significantly higher annual growth rates, with differences among years in all regions being positively correlated with temperature. Within-season growth rates of Labrador Arctic charr peaked in June, declined toward August, and were negatively correlated with the length of time spent at sea and mean experienced sea surface temperatures. A quadratic model relating growth rate to temperature best explained the pattern of within-season growth. The higher annual growth of Ungava Bay Arctic charr was attributed to the high sea surface temperatures experienced in 2010-11 and the localized differences in nearshore productivity as compared to Labrador. Results suggest that increases in water temperature may have profound consequences for Arctic charr growth in the Canadian sub-Arctic, depending on the responses of local marine productivity to those same temperature increases. In the second study, oxygen stable isotope temperature reconstruction methods were used to estimate mean experienced summer temperatures from growth zones within individual otoliths of Arctic charr sampled from contrasting lake environments. For either lake, otolith-estimated temperatures were not significantly related to back-calculated growth. Significant negative effects on back-calculated growth were observed due to increasing air temperatures in the smaller lake, owing to warmer surface waters and a limited amount of preferred cool-water habitat available. A similar relationship was not observed in the larger lake, indicating that the cooler, deeper lake provides ample preferred cool-water habitat for Arctic charr despite climate warming. In addition, young-of-the-year temperatures negatively related to zone 2 growth for the smaller lake, whereas no significant correlation was found for the larger lake. Results here provide evidence for differing climate-influenced growth outcomes depending on the site-specific fish density: preferred thermal habitat volume ratio as dictated by local attributes including lake morphometry, upstream catchment area and life-history strategy. Conclusions from this thesis include the increased need for detailed site- and population-specific assessments of the impacts of increasing temperatures on Arctic charr growth. Better understanding of the drivers of temperature-growth relationships in wild Arctic charr populations will facilitate more accurate stock forecasts with the overall goal of sustaining exploited Arctic charr populations as the climate warms and becomes increasingly variable.