Reducing the Cost of Operating a Datacenter Network 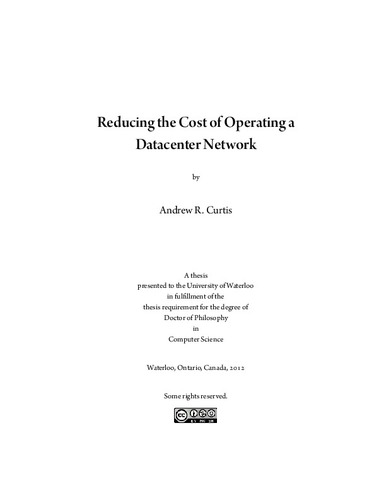 Datacenters are a significant capital expense for many enterprises. Yet, they are difficult to manage and are hard to design and maintain. The initial design of a datacenter network tends to follow vendor guidelines, but subsequent upgrades and expansions to it are mostly ad hoc, with equipment being upgraded piecemeal after its amortization period runs out and equipment acquisition is tied to budget cycles rather than changes in workload. These networks are also brittle and inflexible. They tend to be manually managed, and cannot perform dynamic traffic engineering. The high-level goal of this dissertation is to reduce the total cost of owning a datacenter by improving its network. To achieve this, we make the following contributions. First, we develop an automated, theoretically well-founded approach to planning cost-effective datacenter upgrades and expansions. Second, we propose a scalable traffic management framework for datacenter networks. Together, we show that these contributions can significantly reduce the cost of operating a datacenter network. To design cost-effective network topologies, especially as the network expands over time, updated equipment must coexist with legacy equipment, which makes the network heterogeneous. However, heterogeneous high-performance network designs are not well understood. Our first step, therefore, is to develop the theory of heterogeneous Clos topologies. Using our theory, we propose an optimization framework, called LEGUP, which designs a heterogeneous Clos network to implement in a new or legacy datacenter. Although effective, LEGUP imposes a certain amount of structure on the network. To deal with situations when this is infeasible, our second contribution is a framework, called REWIRE, which using optimization to design unstructured DCN topologies. Our results indicate that these unstructured topologies have up to 100-500\% more bisection bandwidth than a fat-tree for the same dollar cost. Our third contribution is two frameworks for datacenter network traffic engineering. Because of the multiplicity of end-to-end paths in DCN fabrics, such as Clos networks and the topologies designed by REWIRE, careful traffic engineering is needed to maximize throughput. This requires timely detection of elephant flows---flows that carry large amount of data---and management of those flows. Previously proposed approaches incur high monitoring overheads, consume significant switch resources, or have long detection times. We make two proposals for elephant flow detection. First, in the Mahout framework, we suggest that such flows be detected by observing the end hosts' socket buffers, which provide efficient visibility of flow behavior. Second, in the DevoFlow framework, we add efficient stats-collection mechanisms to network switches. Using simulations and experiments, we show that these frameworks reduce traffic engineering overheads by at least an order of magnitude while still providing near-optimal performance.