Developing an Understanding for Wastewater Treatment in Remote Communities in Nunavut, Canada: Investigating the Performance, Planning Practice and Function of Tundra and Constructed Treatment Wetlands 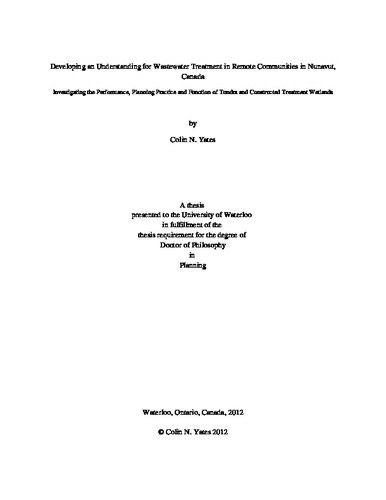 Since humans began to permanently settle locations for extended periods of time there has been the challenge to safely dispose of, or treat human effluent. In specific to the communities of Nunavut and Arctic Canada, the treatment of wastewater has been particularly challenging. The harsh climate, remote nature and socio-economic factors are a few of the aspects which make the treatment of wastewater problematic in Canadian Arctic communities. In the past several decades a number of conventional and alternative wastewater treatment systems (e.g. lagoons and tundra wetlands) have been proposed and implemented in Nunavut and other remote Arctic communities. Knowledge of performance of these systems is limited, as little research has been conducted and regulatory monitoring has been poorly documented or not observed at all. Also, in the past, the rational design process of treatment systems in Arctic communities has not acknowledged cultural and socio-economic aspects, which are important for the long-term management and performance of the treatment facilities in Arctic communities. From 2008 to 2010 I characterized and studied the performance of several tundra wastewater treatment wetlands in the Kivalliq Region of Nunavut, as well as two in the Inuvaliat Region of the Northwest Territories. Performance testing occurred weekly throughout the summer of 2008. Characterization included surveys of plant communities in the tundra wetlands, specifically analyzing the relationship between Carex aquatilis and various nutrient contaminants in wastewater. Through their characterization I was able to provide greater insight into primary treatment zones within the wetland, and identify the main potential mechanisms for the treatment wastewater in the Arctic. I also studied the performance of a horizontal subsurface flow (HSSF) constructed wetland in Baker Lake Nunavut; the first system of its kind in the Canadian Arctic. The weekly performance study showed average weekly percent reduction in all parameters, with small deviations immediately after snow-melt and at the beginning of freeze-up. For the six parameters monitored I observed reductions of 47-94% cBOD5, 57-96% COD, 39-98% TSS, >99% TC, >99% E. coli, 84-99% NH3-Nand 80-99% TP for the six tundra treatment wetlands. Whereas, the wetland characterization study through the use of spatial interpolations on each of the wetlands and their water quality showed that concentrations of the wastewater parameters decreased the most in the first 100m of the wetland in all three treatment wetlands used in this portion of the analysis (Chesterfield Inlet, Paulatuk and Ulukhaktok). Areas of greatest concentration where shown to follow preferential flow paths with concentrations decreasing in a latitudinal and longitudinal direction away from the wastewater source. The Paulatuk and Ulukhaktok treatment wetlands were observed to effectively polish pre-treated wastewater from the facultative lake and engineered lagoon, with removals of key wastewater constituents of cBOD5, TSS and NH3-N to near background concentrations. And despite the absence of pre-treatment in Chesterfield Inlet, the wetland was also observed to effectively treat wastewater to near background concentrations. Further characterization on the composition of the sedge C. aquatilis, showed a high percent cover of the species corresponded with areas of high concentration of NH3-N in the wastewater. A principal components analysis verified the spatial results showing correlation between C. aquatilis cover and NH3-N concentrations. Analysis also showed strong positive relationship between sites closer to the source of wastewater and C. aquatilis. No correlation was found between the other parameters analyzed and C. aquatilis. The first year of study of the HSSF constructed wetland showed promising mean removals in cBOD5, COD, TSS, E. coli, Total Coliforms, and TP throughout the summer of 2009; removals of 25%, 31%, 52%, 99.3%, 99.3%, and 5% were observed respectively. However, the second year of study in 2010 the system did not perform as expected, and concentrations of effluent actually increased. I concluded that a high organic loading during the first year of study saturated the system with organics. Finally, a review of planning process and regulatory measures for wastewater in Arctic communities and the impending municipal wastewater standards effluent resulted in the following recommendations; i) wastewater effluent standards should reflect the diverse arctic climate, and socio-economic environment of the northern communities, ii) effluent standards should be region or even community specific in the Arctic, and iii) for planning and management of wastewater incorporation of Inuit understanding of planning and consultation needs to be incorporated in the future. This research has several major implications for wastewater treatment and planning for Nunavut and other Arctic Regions. The performance and characterization of tundra treatment wetlands fills significant gaps in our understanding of their performance and potential mechanisms of treatment, and treatment period in the Kivalliq Region. Although the HSSF constructed wetland failed, further research into engineered/augmented treatment wetlands should be considered as they provide low-cost low maintenance solutions for remote communities. Finally, the data collected in this study will provide significant insight into the development of new municipal wastewater effluent standards for northern communities, which will be reflected in the Fisheries Act.