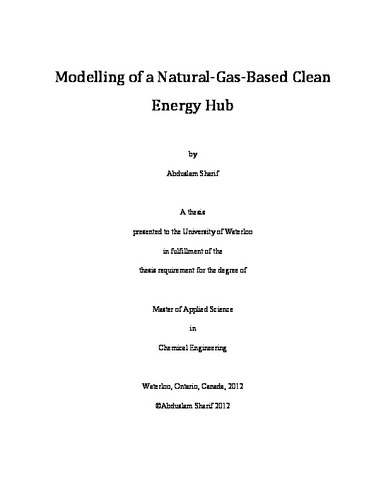 The increasing price of fuel and energy, combined with environmental laws and regulations, have led many different energy producers to integrate renewable, clean energy sources with non-renewable ones, forming the idea of energy hubs. Energy hubs are systems of technologies where different energy forms are conditioned and transformed. These energy hubs offer many advantages compared to traditional single-energy sources, including increased reliability and security of meeting energy demand, maximizing use of energy and materials resulting in increasing the overall system efficiency. In this thesis, we consider an energy hub consisting of natural gas (NG) turbines for the main source of energy— electricity and heat— combined with two renewable energy sources—wind turbines and PV solar cells. The hub designed capacity is meant to simulate and replace the coal-fired Nanticoke Generating Station with NG-fired power plant. The generating station is integrated with renewable energy sources, including wind and solar. The hub will also include water electrolysers for hydrogen production. The hydrogen serves as an energy storage vector that can be used in transportation applications, or the hydrogen can be mixed into the NG feed stream to the gas turbines to improve their emission profile. Alkaline electrolysers’ technology is fully mature to be applied in large industrial applications. Hydrogen, as an energy carrier, is becoming more and more important in industrial and transportation sectors, so a significant part of the thesis will focus on hydrogen production and cost. In order to achieve the goal of replacing the Nanticoke Coal-fired Power Plant by introducing the energy hub concept, the study investigates the modeling of the combined system of the different technologies used in terms of the total energy produced, cost per kWh, and emissions. This modeling is done using GAMS® in order to make use of the optimization routines in the software. The system is modeled so that a minimum cost of energy is achieved taking into account technical and thermodynamic constrains. Excess energy produced during off-peak demand by wind turbines and PV solar cells is used to feed the electrolyser to produce H2 and O2. Through this method, a significant reduction in energy cost and greenhouse gas (GHG) emissions are achieved, in addition to an increased overall efficiency.