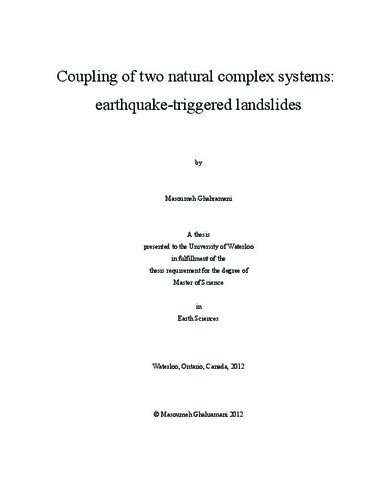 This thesis contains two main parts. The first part presents a database compiling 137 landslide-triggering earthquakes (LTEs) worldwide, with magnitudes greater than the minimum observed threshold for causing landslides (M4.5), for the period of 1998 -2009. Our data sources include a comprehensive review of the existing literature on earthquake-triggered landslides (ETLs), and also a USGS-based earthquake catalog (PAGER-CAT) that contains information on earthquake-triggered secondary events. Only 14 earthquakes out of the 137 seismic events induced significant numbers of landslides (>250). We compared the number of ETLs with the total number of earthquakes with M ≥ 4.5 (n=68,734) during the same period of time. The results show that only 0.2 % of ETLs and only 4.5% of earthquakes of M > 6 resulted in landslide. In addition, we compiled a database of 37 large-scale landslides, involving initial failure volumes of greater than 20 Mm3 that occurred worldwide between 1900 to 2010. The database contains large-scale earthquake-triggered (n ETLs=18) and non-earthquake-triggered landslides (n NETLs=20), i.e., ca. 50% of large-scale landslides were induced by seismic activity. Surprisingly, the volume-temporal frequency curves of ETLs and NETLs show almost identical slopes and intercepts. Thus, for a given volume, the annual frequency of ETLs is almost identical to that of NETLs in the 110 year period. In contrast to previous studies, this thesis found that the volume of the largest landslide triggered by a given landslide-triggering earthquake is not a function of earthquake magnitude. Peak ground motions (PGA, PGV, and PSA) were calculated for the 18 large-scale ETLs at the site of each occurrence and the resulting values show a correlation with the volume of landslides below the threshold of ca. 80 Mm3. Above this threshold, the relationship between peak ground motions and ETL volume shows complex and nonlinear behavior. The results suggest that 1) other special conditions are required for significant earthquake-triggered landslides to occur, and 2) that very large earthquake-triggered landslides (volume greater than 80 Mm3) result from complex progressive failure mechanisms initiated by seismic shaking (i.e., above this threshold volume, landslide volume is independent of PGA, PGV, and PSA). A detailed analysis of the two 1985 Nahanni earthquakes and the North Nahanni rockslide triggered by the first main shock is carried out in the second part of the study. The North Nahanni rockslide, Northwest Territories, Canada was triggered by the earthquake of M=6.6 on October 5th, 1985. The slide occurred in a Palaeozoic carbonate sequence along a thrust fault, which partly follows bedding and partly cuts across bedding. The sliding surface within the limestone consisted of two planes; the lower plane dipped at 20° while the upper plane dipped at 35°. Slope stability analysis is performed using discontinuum numerical modeling. Static slope stability analyses indicate that the sliding rock was marginally safe for the sliding surface friction angles of 24o or higher. Dynamic analyses of the co-seismic movements are conducted by applying a series of sinusoidal waves to the base of the model. The amplitudes of the October earthquake's seismic waves are estimated using strong motion data available from the second main shock. The results, from the dynamic analysis indicate that the slope becomes unstable for given seismic inputs at a specific range of friction angles (24o to 30o) for the sliding surface and the deformation behavior of the North Nahanni rock masses is dependent on the frequency of the seismic signals. Because the static slope stability analysis showed that the slope was close to instability prior to the seismic shaking, we suggest that the 1985 Nahanni earthquake operated as a trigger event that accelerated the occurrence of the slide. This finding supports our earlier results of the global scale study, which showed that the triggering event does not change the general trend of the frequency-volume distribution of landslides; however, it can accelerate the occurrence of slope failure.