An experimental investigation of the spin dynamics of dipolar spin ice 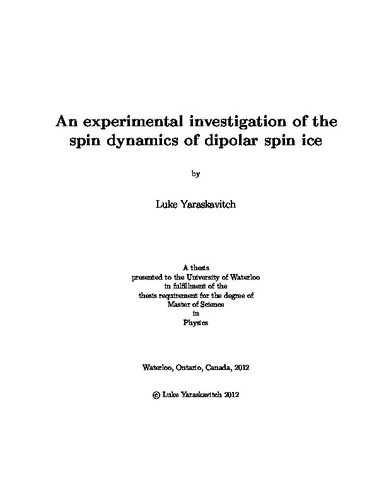 The low temperature spin dynamics of the canonical dipolar spin ice materials is examined. The ac susceptibility of dipolar spin ice materials Ho2Ti2O7 and Dy2Ti2O7 is measured to lower temperatures and frequencies than previous studies. This provides a probe of the dynamics of fractionalized magnetic excitations which have been found to exist and interact as monopole-like particles within the spin ice con guration. Low temperatures and low frequencies access the dilute monopole phase, and provide a valuable stress case scenario to theory which has been used to describe the system to date. The relaxation is found to be well described at the lowest temperatures by an Arrhenius law with single energy barrier for both Ho2Ti2O7 and Dy2Ti2O7, with similar barriers to relaxation, 10.7 K and 9.79 K respectively. It is also revealed to be distinctly different from predictions of the dipolar spin ice model, based upon simulations of both a Coulomb gas and dipolar spin ice on the pyrochlore lattice. These simulations, as well as calculations based on Debye-Huckel theory, do not see Arrhenius behaviour in our temperature range, and do not predict the rate at which dynamics freeze out. It is not currently understood what would be required in order to amend this. The implications for thermal methods of probing spin dynamics is discussed, as well as how this measurement impacts the magnetolyte theory of spin ice. Brief reports are presented in the appendices of specific heat measurements of three spin liquid candidates: Yb2Ti2O7, Tb2Ti2O7, and Pr2Hf2O7. In Yb2Ti2O7, measurements of three single crystals, two unique features, a broad anomaly at 195 mK and sharp peak at 265 mK, are found which seem to comprise elements of previous single crystal and polycrystalline measurements. These low temperature features do not correspond to changes in neutron scattering intensity at 400 mK. In Tb2Ti2O7, a second order transition is found, corresponding to the emergence of a mode in inelastic neutron scattering. Absence of an ordering transition in the suspected <111> antiferromagnet Pr2Hf2O7 is also shown, with specific heat measured down to 100 mK with no ordering transition.