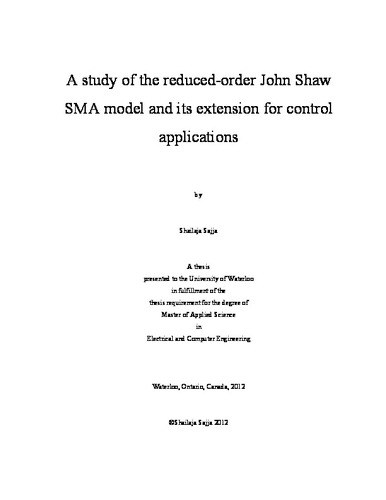 SMA belongs to a class of so-called “smart materials” which possess properties that can be controlled by application of various types of stimuli – stress, temperature, electric field or magnetic field. In particular, SMA is a smart material which undergoes a temperature- or stress-dependent phase transformation giving it the property of remembering its original shape. Once deformed (up to a certain recoverable strain), SMA returns to its original shape upon heating. In this thesis, a study of SMA models and techniques to improve the performance of SMA actuators was carried out. In general, an SMA model is required for 3 main purposes: simulation, analysis and for model-based hysteresis compensation. In this work, the reduced-order form of John Shaw’s partial-differential equation model is chosen for implementation and simulation. The reduced-order form is used because its simpler structure makes it more useful for real-time control applications. The parameters were estimated for the John Shaw model followed by its implementation in MATLAB. From the view of control applications, a limitation of the John Shaw model is the inability to reproduce the so-called ‘minor loop behavior’ which is observed when the material is subject to cycling resulting in incomplete phase transformations. Modeling minor loop behavior is particularly important in closed-loop strain (or position) control applications since achieving a specific target strain between the two (load-dependent) extremes requires partial phase transformation. Herein, the governing equations are modified to include minor loop behavior. This behavior was tested using damped signals which would be expected to trigger minor loops in the actual SMA and reasonable match is observed from the simulations. The use of SMA actuators is limited by the relatively slow response time compared to other smart materials. The conventional current saturation (CS) scheme limits the maximum current into the wire at the manufacturer-specified safe current values in order to protect the wire from damage due to overheating. However, this is a conservative limit on the maximum current and hence, the response is artificially slowed. In order to improve the response time, a model-based temperature saturation (MBTS) scheme was developed, in which current is saturated based on model-predicted temperature. The MBTS scheme allows much higher currents to be applied to the wire, while ensuring that the wire is not damaged. Based on simulations using the reduced-order John Shaw model, it is observed that better tracking occurs using the MBTS scheme in the actuation scheme as compared to the CS scheme.

Shailaja Sajja (2012). A study of the reduced-order John Shaw SMA model and its extension for control applications. UWSpace. http://hdl.handle.net/10012/6665