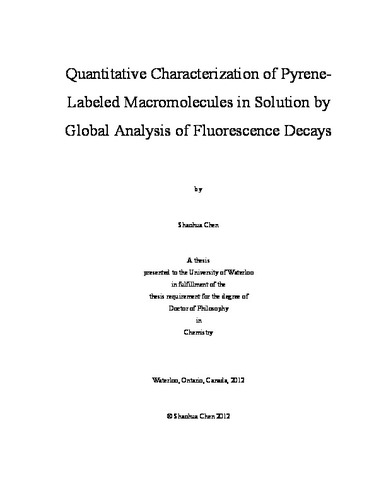 A series of pyrene end-labeled monodisperse poly(ethylene oxide)s (PEO(X)-Py2 where X represents the number average molecular weight (Mn) of the PEOs and equals 2, 5, 10 and 16.5 K) and one pyrene mono-labeled PEO (PEO(2K)-Py1) were synthesized and characterized in solution using fluorescence. First, the end-to-end cyclization (EEC) of PEO(X)-Py2 was investigated in seven organic solvents with viscosities (η) ranging from 0.32 to 1.92 mPa•s. The classical Birks scheme was used to globally fit the pyrene monomer and excimer fluorescence decays. The fraction of pyrenes that did not form excimer (ffree) was found to increase with increasing η and Mn. This result was contrary to the assumptions made by Birks’ scheme. To account for this, ffree was assumed to represent the fraction of PEO chains other than the monolabeled polymer impurities that cannot accomplish EEC. A fluorescence blob model (FBM) was applied to handle this assumption in the process of excimer formation for the PEO(X)-Py2 samples in solution. The radius of a blob, Rblob, in organic solvents was determined according to the results retrieved from the FBM. To quantitatively account for the existence of pyrene impurity in pyrene-labeled macromolecules, known amounts of PEO(2K)-Py1 were added into a PEO(2K)-Py2 solution and the fluorescence decays were fitted globally according to the Birks scheme and “model free” (MF) analysis to verify the validation of the MF analysis. The MF analysis was then applied to determine the amounts of 1-pyrenebutyric acid (PyBA) that had been added to a solution of pyrene end-labeled fourth generation dendritic hybrid (Py16-G4-PS). The results demonstrated that the contribution from unwanted fluorescent species could be isolated and quantitatively accounted for by fitting the fluorescence decays of the pyrene monomer and excimer globally with the MF analysis. Since the PEO(X)-Py2 samples form hydrophobic pyrene aggregates in aqueous solution, a sequential model (SM) was proposed to characterize the pyrene excimer formation of PEO(X)-Py2 in water at different polymer concentration (CP). The capture distance over which the pyrenyl end-groups experience hydrophobic forces in water was determined by assuming that the end-to-end distances of the PEO(X)-Py2 samples adopt a Gaussian distribution and that the fraction of pyrenes that are aggregated (fE0) determined by the sequential model corresponds to the fraction of PEO(X)-Py2 chains whose end-to-end distance is smaller than the hydrophobic capture distance. Since a surfactant can interact with a hydrophobically modified water-soluble polymer in aqueous solution, the interactions taking place between PEO(X)-Py2 and sodium dodecyl sulfate (SDS) were investigated at a low PEO(X)-Py2 concentration. The pyrene monomer and excimer fluorescence decays of the PEO(X)-Py2 and SDS solutions were acquired at various SDS concentrations and globally fitted according to the MF analysis to retrieve the parameters that described the kinetics of pyrene excimer formation. At high SDS concentrations above the critical micelle concentration (CMC), the pyrene end-groups of the short-chain samples (PEO(2K)-Py2 and PEO(5K)-Py2) were incorporated inside the same micelle and excimer was formed intramolecularly, while most pyrene groups of the long-chain samples (PEO(10K)-Py2 and PEO(16.5K)-Py2) were isolated into different micelles. Lastly, both the rheological properties and fluorescence behavior of a pyrene-labeled hydrophobically-modified alkali-swellable emulsion (Py-HASE) polymer in basic aqueous solution with SDS were studied. Furthermore, a joint experimental setup that combined a rheometer and a steady-state fluorometer was applied to investigate at the molecular level the effect that a shearing force had on the polymeric network. However, despite the dramatic decrease in solution viscosity with increasing shear rate, no change in the fluorescence spectra was detected, suggesting that changes in the polymeric network that affected the balance of intra- versus intermolecular pyrene associations did not impact the process of excimer formation. Together the experiments described in this thesis represent the broadest set of examples found in the scientific literature where information on the dynamics and level of association of pyrene-labeled polymers has been retrieved through the quantitative analysis of the fluorescence decays acquired with pyrene-labeled polymers in solution.