Architecture at Play: The Magic Circle and Flow in Video Game Spaces 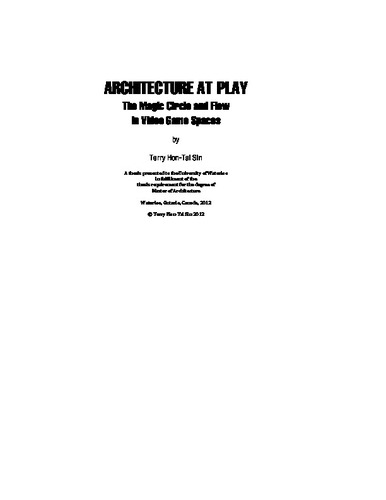 Video games are a part of modern culture. As video game spaces begin to enter a new generation’s spatial lexicon, it is important for architects, curators of spatial design, to understand this new medium of space. This thesis aims to introduce two concepts specific to video game design, the magic circle and flow, to architects as a means of understanding the design of video game spaces. First coined by the Dutch historian Johann Huizinga in Homo Ludens, and later adapted by video game designers Katie Salen and Eric Zimmerman, the magic circle refers to the boundary created by the rules of a game that separate reality from the fantasy of the game. Within the magic circle, the rules of play can transform and give new meaning to spatial organizations that could be considered problematic in real world architectural design. Flow is a psychological concept introduced by Hungarian psychology professor Mihály Csíkszentmihályi. When completing a task, flow occurs when both the skill level of the participant and the challenge level of the task are equally high. When a state of flow is achieved, the task becomes enjoyable and can be carried out indefinitely until the balance is broken. Effective video games spaces are specifically designed to contribute to flow experiences, while ineffective spaces can make a game too easy or too hard, creating a boredom or anxiety for the player. Through a series of explorations and video game case studies, specifically in the first-person and third person shooter genre, this thesis first observes the transformation of implied spatial meanings in the magic circle. It then introduces the unique spatial languages used to generate spaces that support the creation of flow alongside the gameplay and narrative of a video game. This thesis culminates with the design and execution of an original capture the flag map created with the Unreal Engine that tests the concepts of the magic circle and flow in video game spaces. As video games become increasingly ubiquitous, this thesis acts as means of entry for architects to understand the unique properties of an emerging form of spatial design.