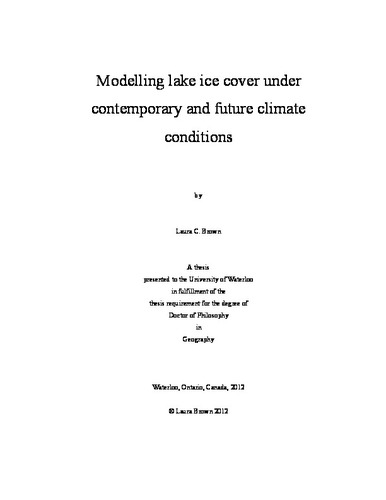 Lakes comprise a large portion of the surface cover in northern North America, forming an important part of the cryosphere. Further alterations to the present day ice regime could result in major ecosystem changes, such as species shifts and the disappearance of perennial ice cover. Lake ice has been shown to both respond to, and play a role in the local/regional climate. The timing of lake ice phenological events (e.g. break-up/freeze-up) is a useful indicator of climate variability and change. Trends in ice phenology have typically been associated with variations in air temperatures while trends found in ice thickness tend to be associated more with changes in snow cover. The inclusion of lakes and lake ice in climate modelling is an area of increased attention in recent studies and the ability to accurately represent ice cover on lakes will be an important step in the improvement of global circulation models, regional climate models and numerical weather forecasting. This thesis aimed to further our understanding of lake ice and climate interactions, with an emphasis on ice cover modelling. The Canadian Lake Ice Model (CLIMo) was used throughout for lake ice simulations. To validate and improve the model results, in situ measurements of the ice cover for two seasons in Churchill, MB were obtained using an upward-looking sonar device Shallow Water Ice Profiler (SWIP) installed on the bottom of the lake. The SWIP identified the ice-on/off dates as well as collected ice thickness measurements. In addition, a digital camera was installed on shore to capture images of the ice cover through the seasons and field measurements were obtained of snow depth on the ice, and both the thickness of snow ice (if present) and total ice cover. Altering the amounts of snow cover on the ice surface to represent potential snow redistribution affected simulated freeze-up dates by a maximum of 22 days and break-up dates by a maximum of 12 days, highlighting the importance of accurately representing the snowpack for lake ice modelling. The late season ice thickness tended to be under estimated by the simulations with break-up occurring too early, however, the evolution of the ice cover was simulated to fall between the range of the full snow and no snow scenario, with the thickness being dependent on the amount of snow cover on the ice surface. CLIMo was then used to simulate lake ice phenology across the North American Arctic from 1961–2100 using two climate scenarios produced by the Canadian Regional Climate Model (CRCM). Results from the 1961–1990 time period were validated using 15 locations across the Canadian Arctic, with both in situ ice cover observations from the Canadian Ice Database as well as additional ice cover simulations using nearby weather station data. Projected changes to the ice cover using the 30-year mean data between 1961–1990 and 2041–2070 suggest a shift in break-up and freeze-up dates for most areas ranging from 10–25 days earlier (break-up) and 0–15 days later (freeze-up). The resulting ice cover durations show mainly a 10–25 day reduction for the shallower lakes (3 and 10 m) and 10–30 day reduction for the deeper lakes (30 m). More extreme reductions of up to 60 days (excluding the loss of perennial ice cover) were shown in the coastal regions compared to the interior continental areas. The mean maximum ice thickness was shown to decrease by 10–60 cm with no snow cover and 5–50 cm with snow cover on the ice. Snow ice was also shown to increase through most of the study area with the exception of the Alaskan coastal areas. While the most suitable way to undertake wide scale lake ice modeling is to force the models with climate model output or reanalysis data, a variety of different lake morphometric conditions could exist within a given grid cell leading to different durations of ice cover within the grid cell. Both the daily IMS product (4 km) and the MODIS snow product (500 m) were assessed for their utility at determining lake ice phenology at the sub-grid cell level throughout the province of Quebec. Both products were useful for detecting ice-off, however, the MODIS product was advantageous for detecting ice-on, mainly due to the finer resolution and resulting spatial detail of the lake ice. The sub-grid cell variability was typically less than 2%, although it ranged as high as 10% for some grid cells. An indication of whether or not the simulated ice-on/off dates were within the sub-grid cell variability was determined and on average across the entire province, were found to be within the variability 62% of the time for ice-off and 80% of the time for ice-on. Forcing the model with the future climate scenarios from CRCM predicts ice cover durations throughout the region will decrease by up to 50 days from the current 1981-2010 means to the 2041-2070 means, and decrease from 15 to nearly 100 days shorter between the contemporary and 2071-2100 means. Overall, this work examined the climate-lake-ice interactions under both contemporary and future climate conditions, as well as provided new insight into sub-grid cell variability of lake ice.