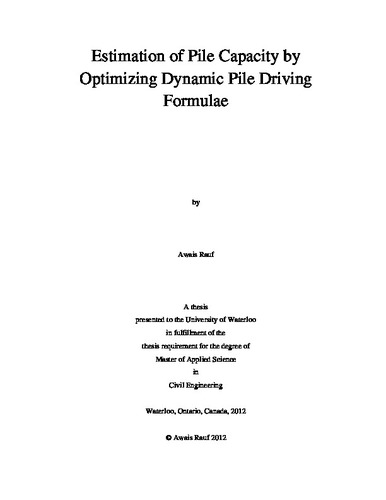 Piles have been used since prehistoric times in areas with weak subsurface conditions either to reinforce existing ground, create new ground for habitation or trade, and support bridges and buildings. Originally piles were composed of timber and driven with drop hammers using very heavy ram weights. As technology improved so did the materials that piles are composed of as well as the equipment itself. Currently, piling is a multibillion dollar a year industry, thus the need to develop more accurate prediction methods can potentially represent a significant savings in cost, material, and man power. Multiple predictive methods have been developed to estimate developed pile capacity. These range from static theoretical formulae based on geotechnical investigation prior to pile driving even occurring using specific pile and hammer types to semi empirically based dynamic formulae used during actual driving operations to more recently developed computer modeling and signal matching programs which are calibrated with site condition during initial geotechnical investigations or test piling to full scale static load tests where piles are loaded to some predetermined value or failure condition. In this thesis, dynamic formulae are used to predict pile capacity from those installed by drop and diesel hammers and are compared to the results from pile load tests, which are taken as the true measure of developed bearing capacity. The dynamic formulae examined are the Engineering News Record (ENR), Gates, Federal Highway Administration (FHWA) modified Gates, Hiley, and Ontario Ministry of Transportation (MTO) modified Hiley formulae. Methods of investigation include calculating pile capacities from the formulae as they are, omitting the factors of safety, revising the formulae with averaged coefficients and conducting multi regression analysis to solve for one or two coefficients simultaneously and revising the dynamic formula to determine if more accurate bearing capacity prediction are possible. To objectively determine which formulae provide the most accurate bearing capacities, the predicted capacities will be compared to results obtained from static pile load tests and simple statistics on the resulting data set will be calculated including regression analysis, standard deviations, coefficients of variation, coefficients of determination, and correlation values.