Neoliberal Governmentality in the Red-Green Era: Tracing Facets of the Entrepreneurial Self in Three Contemporary German Novels 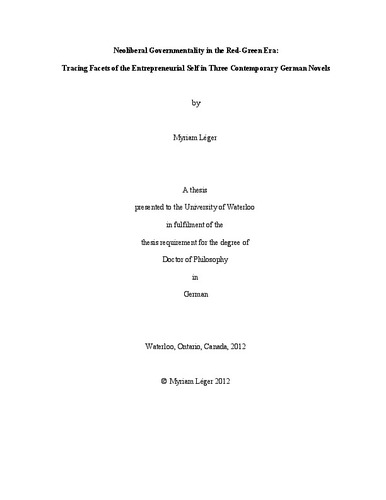 This dissertation examines three contemporary German novels and their respective representations of the Red-Green era. It focuses on the discourses to which these novels refer in order to shed light on the consequences and implications of Red-Green politics for the subjectification of individuals during this time. When Gerhard Schröder replaced Helmut Kohl in 1998 as Chancellor of Germany, there was a noticeable shift towards neoliberal policies that has since received much attention in scholarly studies and public-political debates about its impact on Germany’s economy, social security system, political party system, and institutional structure. Taking a new approach to understanding the politics of the Red-Green coalition, I argue that its impact is noticeable not only in the political sphere, but that this impact also permeates all levels of society, in particular concepts of selfhood, and that it has found its way into contemporary literary works. As my particular interest lies in investigating how these literary works process the consequences and implications of Red-Green politics for the subjectification of individuals during this time, the novels I selected situate themselves explicitly within the Red-Green era mostly through references to some of its most well-known labour market measures, namely the Ich-AG, the Mittelstandsoffensive, and employability training programs. Analysing the neoliberal discourses to which these novels refer and (re-) constructing the particular sets of knowledge, truths, and norms that enable neoliberal governing practices allow me to shed light on the mechanisms of individuals’ subjectification through the politics of the Red-Green coalition. Of particular importance during the Red-Green era are the discourses surrounding entrepreneurialism as they construct the market as a structuring principle of society in which all individuals are called upon as entrepreneurs. For the examination of neoliberal governing discourses, I draw both on Michel Foucault’s theory of neoliberal governmentality and Ulrich Bröckling’s conceptualization of the entrepreneurial self, an idealized and hence unachievable self-image that addresses individuals as entrepreneurs of their own lives. Foucault’s theory allows going beyond an understanding of neoliberalism as a political theory of free market policies but views it as an act of governing that expands the notion of the government of others to include the government of the self according to the principles of entrepreneurialism and the market, hence taking into account the participatory role of the subject. Bröckling’s conceptualization draws on Foucault’s theory to examine the subjectification of individuals as entrepreneurial selves, that is, as individuals who are constantly stimulated to act as enterprising subjects. The literary analysis of the novels – Ralph Hammerthaler’s Alles bestens (2002), Reinhard Liebermann’s Das Ende des Kanzlers. Der finale Rettungsschuss (2004), and Joachim Zelter’s Schule der Arbeitslosen (2006) – shows they cast light on various ways in which specific forms of subjectivity are promoted and enabled through neoliberal governing practices. More specifically, I illustrate that the protagonists in each novel represent three different facets of the entrepreneurial self, namely the enthusiast, the melancholic, and the social lemming that Ulrich Bröckling identifies in his typology of the entrepreneurial self (2008). While the nameless protagonist in Alles bestens embraces the market as a universal structuring principle and a metaphor for his own life, the protagonist Hans Hansmann in Das Ende des Kanzlers embraces free market principles, yet fails to fully understand the demands of the market and his own position within it. By contrast, Karla Meier in Schule der Arbeitslosen refuses to accept yet nevertheless follows the demands implicit in the image of the entrepreneurial self.