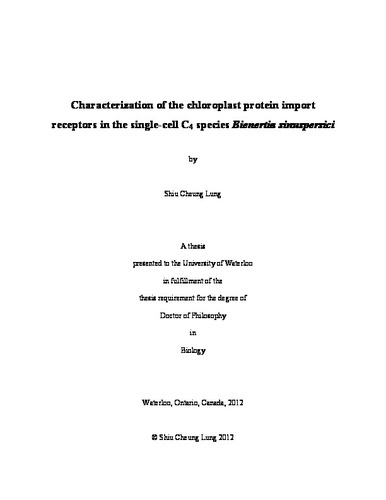 Bienertia sinuspersici is one of the three currently known land plants which perform C4 photosynthesis without the conventional dual-cell system, but rather through intracellular compartmentation of organelles and enzymes within individual photosynthetic cells. Whilst earlier works have involved anatomical and molecular techniques to understand the unique organelle partitioning, the lack of technology for gene manipulation and organelle purification has precluded biochemical characterization of this novel single-cell C4 model. Of particular interest is the unknown mechanism(s) leading to the differential accumulation of photosynthetic enzymes in the dimorphic chloroplasts within the same cells, which implicates the selective import of precursor proteins into the organelles. The first part of this thesis describes the establishment of multiple cell biology techniques for studying the single-cell C4 model. First, procedures have been optimized for isolating a homogenous population of chlorenchyma protoplasts from B. sinuspersici. Cell viability and preservation of the complex organelle compartmentation were confirmed by cytochemical staining and transient expression of fluorescent fusion proteins. The versatility of this highly efficient gene manipulation system was exemplified by the sorting of various fusion proteins to their respective subcellular locations. The isolation of intact chlorenchyma protoplasts has also led to the successful purification of the dimorphic chloroplasts. A protocol has been optimized for hypo-osmotic lysis of isolated protoplasts and concomitant separation of the central chloroplasts embedded in discrete ball structures and the peripheral chloroplasts adhered to the vacuole surface. The dimorphic chloroplasts were further purified to high homogeneity as evaluated by immunoblotting of their respective protein markers. The second part of this thesis reports the identification and characterization of the chloroplast protein import receptors Toc159 and Toc34 in B. sinuspersici. Protein expression profiling revealed independent regulation of two identified Toc159 isoforms during leaf development, implicating their different substrate selectivities. Several subcellular localization approaches consistently demonstrated the co-existence of a cytosolic form of Toc159, which was found to interact with actin filaments and microtubules. This unique localization pattern is pertinent to the concurrent discovery of a novel mechanism for the reversible targeting of Toc159 to the chloroplast surface. Multiple computational methods predicted a chloroplastic transit peptide-like sorting signal at the carboxyl end of Toc159, which was experimentally demonstrated to guide passenger proteins to the chloroplast envelope or stroma depending on its orientation. Collectively, the data in this thesis point to a chloroplast protein import model proposing that a novel sorting signal guides the movement of the Toc159 receptor to and from the chloroplast surface for preprotein targeting which may be assisted by the cytoskeleton. In light of the established gene manipulation and organelle purification techniques, the mechanism for selective protein import into dimorphic chloroplasts can be studied in the future.