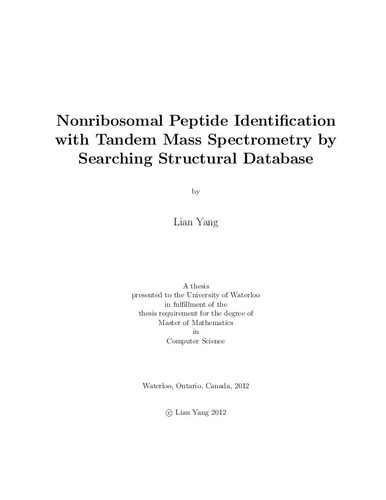 Nonribosomal peptides (NRP) are highlighted in pharmacological studies as novel NRPs are often promising substances for new drug development. To eﬀectively discover novel NRPs from microbial fermentations, a crucial step is to identify known NRPs in an early stage and exclude them from further investigation. This so-called dereplication step ensures the scarce resource is only spent on the novel NRPs in the following up experiments. Tandem mass spectrometry has been routinely used for NRP dereplication. However, few bioinformatics tools have been developed to computationally identify NRP compounds from mass spectra, while manual identiﬁcation is currently the roadblock hindering the throughput of novel NRP discovery. In this thesis, we review the nature of nonribosomal peptides and investigate the challenges in computationally solving the identiﬁcation problem. After that, iSNAP software is proposed as an automated and high throughput solution for tandem mass spectrometry based NRP identiﬁcation. The algorithm has been evolved from the traditional database search approach for identifying sequential peptides, to one that is competent at handling complicated NRP structures. It is designed to be capable of identifying mixtures of NRP compounds from LC-MS/MS of complex extract, and also ﬁnding structural analogs which diﬀer from an identiﬁed known NRP compound with one monomer. Combined with an in-house NRP structural database of 1107 compounds, iSNAP is tested to be an eﬀective tool for mass spectrometry based NRP identiﬁcation. The software is available as a web service at http://monod.uwaterloo.ca/isnap for the research community.