Touch and Emotion in Haptic and Product Design 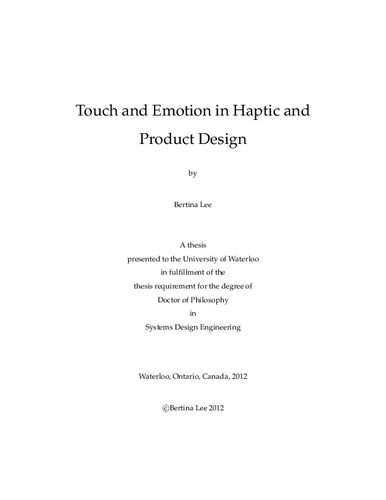 The emotional experience of products can have enormous impact on the overall product experience: someone who is feeling positive is more likely to be accepting of novel products or to be more tolerant of unexpected or unusual interface behaviours. Being able to improve users’ emotions through product interaction has clear benefits and is currently the focus of designers all over the world. The extent to which touch-based information can affect a user’s experience and observable behaviour has been given relatively little attention in haptic technology or other touch-based products where research has tended to focus on psychophysics relating to technical development, in the case of the former, and usability in the case of the latter. The objective of this research was therefore to begin to explore generalizable and useful relationship(s) between design parameters specific to the sense of touch and the emotional response to tactile experiences. To this end, a theoretical ’touch-emotion model’ was developed that incorporates stages from existing information and emotion processing models, and a subset of pathways (the ‘Affective’, ‘Cognitive’, and ‘Behaviour Pathways’) was explored. Four experiments were performed to examine how changes in various touch factors, such as surface roughness and availability of haptic (that is, touch-based) information during exploration, impacted user emotional experience and behaviour in the context of the model’s framework. These experiments also manipulated factors related to the experience of touch in real-world situations, such as the availability of visual information and product context. Exploration of the different pathways of the touch-emotion model guided the analysis of the experiments. In exploring the Affective Pathway, a robust relationship was found between increasing roughness and decreasing emotional valence (n = 36, p < 0.005), regardless of the availability of haptic or visual information. This finding expands earlier research that focused on the effect of tactile stimuli on user preference. The impact of texture on the Cognitive Pathway was examined by priming participants to think of the stimuli as objects varying in emotional commitment, such as a common mug (lower) or a personal cell phone (higher). Emotional response again decreased as roughness increased, regardless of primed context (n = 27, p < 0.002) and the primed contexts marginally appeared to generally improve or reduce emotional response (n = 27, p < 0.08). Finally, the exploration of the Behaviour Pathway considered the ability of roughness-evoked emotion to act as a mediator between physical stimuli and observable behaviour, revealing that, contrary to the hypothesis that increased emotional valence would increase time spent reflecting on the stimuli, increased emotion magnitude (regardless of the positive or negative valence of the emotion) was associated with increased time spent in reflection (n = 33, p < 0.002). Results relating to the Behaviour Pathway suggested that the portion of the touch-emotion model that included the last stages of information processing, observable behaviour, may need to be revised. However, the insights of the Affective and Cognitive Pathway analyses are consistent with the information processing stages within those pathways and give support to the related portions of the touch-emotion model. The analysis of demographics data collected from all four experiments also revealed interesting findings which are anticipated to have application in customizing haptic technology for individual users. For example, correlations were found between self-reported tactual importance (measured with a questionnaire) and age (n = 79, r = 0.28, p < 0.03) and between self-reported tactual importance and sensitivity to increased roughness (n = 79, r = -0.27, p < 0.04). Higher response times were also observed with increased age (rIT = 0.49, rRT = 0.48; p < 0.01). This research contributes to the understanding of how emotion and emotionevoked behaviour may be impacted by changing touch factors using the exemplar of roughness as the touch factor of interest, experienced multimodally and in varying situations. If a design goal is to contribute to user emotional experience of a product, then the findings of this work have the potential to impact design decisions relating to surface texture components of hand-held products as well as for virtual surface textures generated by haptic technology. Further, the touchemotion model may provide a guide for the systematic exploration of the relationships between surface texture, cognitive processing, and emotional response.