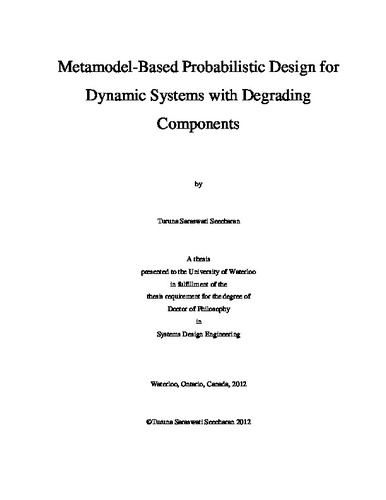 The probabilistic design of dynamic systems with degrading components is difficult. Design of dynamic systems typically involves the optimization of a time-invariant performance measure, such as Energy, that is estimated using a dynamic response, such as angular speed. The mechanistic models developed to approximate this performance measure are too complicated to be used with simple design calculations and lead to lengthy simulations. When degradation of the components is assumed, in order to determine suitable service times, estimation of the failure probability over the product lifetime is required. Again, complex mechanistic models lead to lengthy lifetime simulations when the Monte Carlo method is used to evaluate probability. Based on these problems, an efficient methodology is presented for probabilistic design of dynamic systems and to estimate the cumulative distribution function of the time to failure of a performance measure when degradation of the components is assumed. The four main steps include; 1) transforming the dynamic response into a set of static responses at discrete cycle-time steps and using Singular Value Decomposition to efficiently estimate a time-invariant performance measure that is based upon a dynamic response, 2) replacing the mechanistic model with an approximating function, known as a “metamodel” 3) searching for the best design parameters using fast integration methods such as the First Order Reliability Method and 4) building the cumulative distribution function using the summation of the incremental failure probabilities, that are estimated using the set-theory method, over the planned lifetime. The first step of the methodology uses design of experiments or sampling techniques to select a sample of training sets of the design variables. These training sets are then input to the computer-based simulation of the mechanistic model to produce a matrix of corresponding responses at discrete cycle-times. Although metamodels can be built at each time-specific column of this matrix, this method is slow especially if the number of time steps is large. An efficient alternative uses Singular Value Decomposition to split the response matrix into two matrices containing only design-variable-specific and time-specific information. The second step of the methodology fits metamodels only for the significant columns of the matrix containing the design variable-specific information. Using the time-specific matrix, a metamodel is quickly developed at any cycle-time step or for any time-invariant performance measure such as energy consumed over the cycle-lifetime. In the third step, design variables are treated as random variables and the First Order Reliability Method is used to search for the best design parameters. Finally, the components most likely to degrade are modelled using either a degradation path or a marginal distribution model and, using the First Order Reliability Method or a Monte Carlo Simulation to estimate probability, the cumulative failure probability is plotted. The speed and accuracy of the methodology using three metamodels, the Regression model, Kriging and the Radial Basis Function, is investigated. This thesis shows that the metamodel offers a significantly faster and accurate alternative to using mechanistic models for both probabilistic design optimization and for estimating the cumulative distribution function. For design using the First-Order Reliability Method to estimate probability, the Regression Model is the fastest and the Radial Basis Function is the slowest. Kriging is shown to be accurate and faster than the Radial Basis Function but its computation time is still slower than the Regression Model. When estimating the cumulative distribution function, metamodels are more than 100 times faster than the mechanistic model and the error is less than ten percent when compared with the mechanistic model. Kriging and the Radial Basis Function are more accurate than the Regression Model and computation time is faster using the Monte Carlo Simulation to estimate probability than using the First-Order Reliability Method.