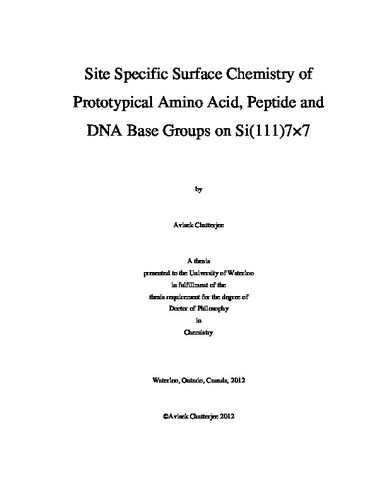 The surface chemistry of glycine, glycylglycine, adenine and thymine on Si(111)7×7 are studied for the first time by X-ray photoelectron spectroscopy (XPS) and Scanning Tunneling Microscopy (STM) experimental techniques. The results are supported with the density functional theory based computations by elucidating equilibrium geometries of the adsorbate-substrate structures. In contrast to common carboxylic acids, glycine is found to adsorb on Si(111)7×7 dissociatively through cleavage of a NH bond instead of O−H bond. Increasing the glycine film thickness reveals the existence of a transitional adlayer between the first adlayer and the zwitterionic multilayer. This transitional adlayer is estimated to be 1-2 adlayer thick and is characterized by the presence of intermolecular NHO hydrogen bond. Density Functional Theory (DFT) calculations of glycine adsorption on Si(111)7×7 and Si(100)2×1 model surfaces illustrates that the formation of different surface adducts involving the –NH2 and –COOH functional groups plays a vital role in determining the adsorbate structures on the 7×7 and 2×1 surfaces and therefore control the ultimate surface adproducts. The unique unidentate adsorption configuration of glycine on Si(111)77 through NH dissociation, with the unreacted carboxyl group remaining free, has shown to be an effective way to capture other biomolecules such as glycylglycine, alanine, adenine and thymine on a glycine-functionalized Si(111)7×7 surface and through [OHN] hydrogen bonding. The captured molecules can be released simply by annealing. The glycine-functionalized Si(111) surface therefore provides a flexible platform for potential applications as selective molecular traps, chemical sensors, and biomolecular electronic components. The STM study of glycine adsorption on Si(111)7×7 provides strong evidence for dissociative adsorption of glycine through N–H bond cleavage (and N–Si bond formation) as reported in X-ray photoemission study. In addition, STM images with higher glycine exposures shows that the second adlayer is mediated by vertical hydrogen bonding and that the horizontal hydrogen bonding between two N–H dissociated glycine adsorbates at two neighbouring adatom sites can be possible. Similar to glycine adsorption on Si(111)7×7 surface, the XPS investigation of glycylglycine on the Si(111)7×7 also reveals three growth stages; dissociative adsorption of glycylglycine in the first adlayer, a hydrogen bonded transitional adlayer and a ultimately the zwitterionic multilayer. In contrast to glycine, glycylglycine adsorbs in a bidentate fashion with the dissociation of N‒H and O‒H bonds in the first adlayer. The STM investigations support the evidence of dissociative adsorption of glycylglycine in a bidentate fashion on two adjacent Si adatoms across a dimer wall or an adatom-restatom pair as observed from the filled state images. The strong bidentate interactions of glycylglycine with the Si atoms also inhibit surface diffusion of the adsorbed fragment, and the adsorption apparently follows random sequential adsorption statistics. The XPS and STM results of the glycylglycine adsorption on Si(111)7×7 can be corroborated with our DFT based computational study which suggests that the bidentate adproducts involving N–H and O–H dissociations are viable. In addition, the DFT results also predict that the free –CONH– and –COOH groups remaining on the respective bidentate adstructures could facilitate adsorption of the second adlayer through the formation of hydrogen bonding. In sharp contrast to glycine and glycylglycine, the STM studies of adenine on Si(111)7×7 shows the evidence of molecular adsorption of adenine through dative bonding to the surface silicon atoms. The majority of the adsorbed adenine molecules are found to appear as dimer pairs at the initial adsorption stage, which are formed by hydrogen bonds. The experimental evidence of the formation of dative bonds between the substrate and adenine and the feasibility of the H-bond mediated dimers can also be supported by ab-initio DFT/B3LYP/6-31G++(d,p) calculations and X-ray photoemission data. As the exposure of adenine increases, the numbers of dimers as well as the unique self-organized adenine structures also increase. These dimers and self-assembled structures are found to be most prominent in the growth of adenine nanowires, most notably aligned along the Si dimer-wall or [-110] direction of the 7×7 unit cell. The self-aligned adenine dimer nanowires offer a natural template for catch-and-release biosensing, lithography, and molecular electronic applications. On the other hand, the STM study of another nucleobase thymine on Si(111)7×7 surfaces reveal the existence of three different kinds of adsorption products. When compared with the XPS and DFT based computational methods, it can be suggested that the three different adsorption products could correspond to 1,4 and 3,6 cycloaddition products and hydrogen bonded adcomplex respectively. The statistical analysis for three different exposures of Thy on the 7×7 surface further helps to assign the three different features observed in STM images to the 1,4 and 3,6 cycloaddition products as well as to the hydrogen bonded adcomplexes. The present work therefore illustrates the importance of the unique site specific surface chemistry of these four prototypical biomolecules on Si(111)7×7 which could be harnessed and used in the future biodevices by functionalizing the Si(111)7×7 surface with appropriate molecules such as glycine, glycylglycine, adenine or thymine.