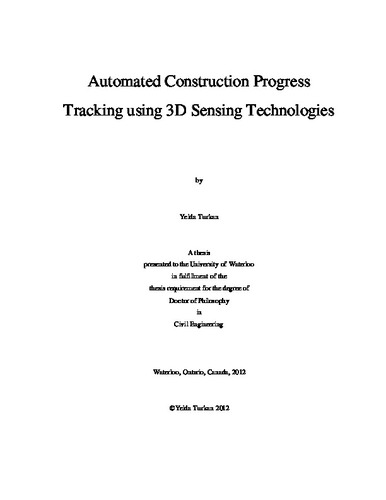 Accurate and frequent construction progress tracking provides critical input data for project systems such as cost and schedule control as well as billing. Unfortunately, conventional progress tracking is labor intensive, sometimes subject to negotiation, and often driven by arcane rules. Attempts to improve progress tracking have recently focused mainly on automation, using technologies such as 3D imaging, Global Positioning System (GPS), Ultra Wide Band (UWB) indoor locating, hand-held computers, voice recognition, wireless networks, and other technologies in various combinations. Three dimensional (3D) imaging technologies, such as 3D laser scanners (LADARs) and photogrammetry have shown great potential for saving time and cost for recording project 3D status and thus to support some categories of progress tracking. Although laser scanners in particular and 3D imaging in general are being investigated and used in multiple applications in the construction industry, their full potential has not yet been achieved. The reason may be that commercial software packages are still too complicated and time consuming for processing scanned data. Methods have however been developed for the automated, efficient and effective recognition of project 3D BIM objects in site laser scans. This thesis presents a novel system that combines 3D object recognition technology with schedule information into a combined 4D object based construction progress tracking system. The performance of the system is investigated on a comprehensive field database acquired during the construction of a steel reinforced concrete structure, Engineering V Building at the University of Waterloo. It demonstrates a degree of accuracy that meets or exceeds typical manual performance. However, the earned value tracking is the most commonly used method in the industry. That is why the object based automated progress tracking system is further explored, and combined with earned value theory into an earned value based automated progress tracking system. Nevertheless, both of these systems are focused on permanent structure objects only, not secondary or temporary. In the last part of the thesis, several approaches are proposed for concrete construction secondary and temporary object tracking. It is concluded that accurate tracking of structural building project progress is possible by combining a-priori 4D project models with 3D object recognition using the algorithms developed and presented in this thesis.