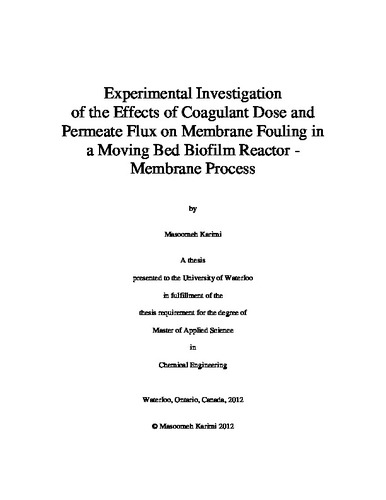 The application of membrane bioreactors (MBRs) to wastewater treatment is increasing due to their ability to operate at high biomass concentrations and to deliver effluents of high quality. The major challenges associated with the application of MBRs is fouling which can shorten the useful life of the membrane, increase in the amount of energy consumed, and the cost for membrane cleaning. The main reasons for fouling are the deposition of solids as a cake layer, pore plugging by colloidal particles, adsorption of soluble compounds and biofouling. Fouling is a particular problem for activated sludge membrane bioreactors (AS-MBRs) since this process deals with liquors having a high concentration of total solids as well as dissolved compounds such as extracellular polymeric substances (EPS). The combination of a moving bed biofilm reactor and a membrane reactor (MBBR-MR) has significant potential. It may be considered as a compact wastewater treatment process which can compensate for the drawbacks of AS-MBRs. Readily biodegradable COD is removed in the MBBR while particulate matter is separated by the membrane. To further reduce the membrane fouling the effects of adding an intermediate coagulation stage was investigated critically on membrane fouling. The present study includes an overall assessment of the performance of a combined MBBR-MR system, based on the chemical oxygen demand (COD) removal efficiency and membrane fouling mechanism. The required test runs were conducted using pilot-scale MBBR and ultra filtration membrane. The pilot MBBR had a working volume of 1.8 m3 with a 60% carrier fill fraction. The MBBR was operated with loading rate of 78 ± 21 g/m2/d (HRT of 4 h). The ultra-filtration was spiral wound and composed of polyethersulfone (PES) with a pore size of 0.03 microns. The MBBR feed was obtained from a final treated wastewater effluent in a food processing plant located in SW Ontario. In this research, ferric chloride was also employed as a coagulant and influences of different coagulant doses and permeate fluxes on membrane fouling were studied. Based on the experimental results, it was found that the combination of MBBR with membrane filtration can produce a constant high quality permeate that is appropriate for water reuse purposes. The composition analysis of permeate showed that the stream is free of suspended solids and the average COD turns to 75 ± 25 mg/l. In addition, the MBBR had a SCOD removal of 76% ± 7% which is considered as a reasonable efficiency for a single reactor. Operating the membrane without adding coagulant caused rapid fouling in a short time period and the Trans Membrane Pressure (TMP) reached the maximum allowable pressure of 10 psi. However, addition of coagulant was found to decrease the fouling of the membrane as well as increasing the filtration time. The extent of the pre-coagulation effect on membrane fouling was found to strongly depend on the dosage of the coagulant and the MBBR effluent characteristics. A coagulant dose of 400 mg/l with a permeate flux of 7.6 LMH performed the best at reducing membrane fouling. Colloidal fouling was found to be a significant fouling mechanism at low coagulant dose (e.g. 200 mg/l), while cake formation appeared to be mainly responsible for fouling at higher coagulant doses. Permeate flux was found to have a significant effect on the fouling of the membrane. The presence of colloidal matters at low fluxes and TSS at higher fluxes were responsible for fouling of the membrane by blocking the pores and formation of the cake layer on the membrane surface, respectively. Then later addition of Dissolved Air Flotation (DAF) inside the factory had a noticeable effect on wastewater characteristics and consequently on fouling of the membrane. A 22% and 31% improvement in TCOD and TSS in the wastewater was observed leading to reduction in the fouling.