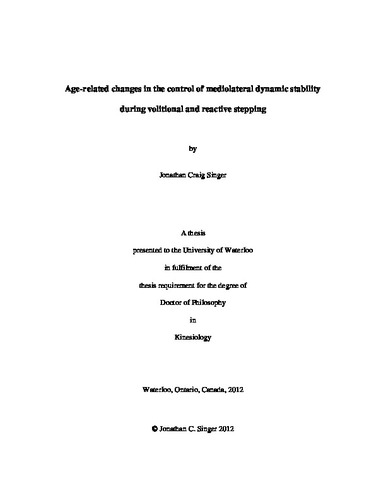 The high incidence of falls and fall-related injuries among Canadians over the age of 65 continues to be a key public health issue. As the current proportion of individuals within this cohort of the population is predicted to double by the year 2031, the absolute number of individuals experiencing falls, fall-related injuries and subsequent hospitalization will increase dramatically. While a fall in any direction can lead to injury and reduced quality of life, lateral falls have been shown to be prevalent and can be particularly devastating because of the increased probability of hip fracture. Forward stepping tasks, whether initiated volitionally or by external perturbation, pose a challenge to stability, as they require the precise regulation of the spatial and temporal characteristics of the whole body centre of mass (COM) in relation to a changing base of support (BOS). Despite our understanding of both proactive and reactive mechanisms for balance control at movement initiation during such stepping tasks, there appears to be little understanding or consensus regarding the origins of age-related decline in mediolateral stability, which can manifest during the restabilisation phase, at movement termination. From this, the global objective of this thesis was to develop further understanding regarding such age-related differences in mediolateral dynamic stability control during the restabilisation phase of forward stepping. Notwithstanding the well documented differences between volitional and perturbation-evoked stepping until the time of foot-contact, we have proposed the control of the COM during the restabilisation phase of such stepping tasks to be a central determinant of age-related differences in mediolateral dynamic stability, common to both forms of stepping. We quantified the COM kinematics during the restabilisation phase and calculated the magnitude of incongruity between the peak and final, stable, COM position, in addition to the intertrial variability of this incongruity. Further, we analysed the orientation of the net ground reaction force (GRF) with respect to the COM, which allowed us to draw conclusions regarding the mechanisms that may be responsible for the age-related differences in the COM kinematics. To vary the challenge to control, we included conditions in which individuals were required to step with altered step width. In addition, we attempted to probe the extent and means by which individuals could alter the dynamics of stepping over time, with trial repetition. In general, we found that overshoots of the final COM position were common to all forms of stepping and may serve the functional role of simplifying reactive control during the restabilisation phase. The magnitude and intertrial variability of incongruity, however, were greater among the older adults during all forms of stepping. We believe such increased COM incongruity is likely indicative of greater instability within this group, which may be associated with the increased time required to reorient the net GRF in a manner necessary to oppose the total body angular momentum that developed during the swing phase. Particularly interesting was the use of proactive strategies by older adults, which may have the potential to offset instability that arises due to difficulty with reactive control during the restabilisation phase. The present work provides support for previous studies, which have suggested that the control of mediolateral stability may be particularly challenging for older adults. Further, our work provides evidence that the challenges associated with mediolateral stability control have important links to the restabilisation phase and are common to both volitional and reactive stepping. This work highlights the need to further explore the control of mediolateral stability and develop therapeutic interventions to reduce such incidence of instability among older adults.