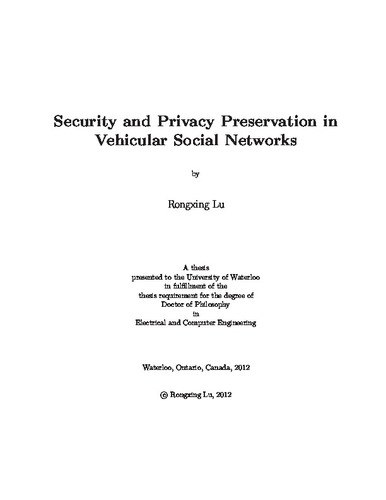 Improving road safety and traffic efficiency has been a long-term endeavor for the government, automobile industry and academia. Recently, the U.S. Federal Communication Commission (FCC) has allocated a 75 MHz spectrum at 5.9 GHz for vehicular communications, opening a new door to combat the road fatalities by letting vehicles communicate to each other on the roads. Those communicating vehicles form a huge Ad Hoc Network, namely Vehicular Ad Hoc Network (VANET). In VANETs, a variety of applications ranging from the safety related (e.g. emergence report, collision warning) to the non-safety related (e.g., delay tolerant network, infortainment sharing) are enabled by vehicle-to-vehicle (V-2-V) and vehicle-to-roadside (V-2-I) communications. However, the flourish of VANETs still hinges on fully understanding and managing the challenging issues over which the public show concern, particularly, security and privacy preservation issues. If the traffic related messages are not authenticated and integrity-protected in VANETs, a single bogus and/or malicious message can potentially incur a terrible traffic accident. In addition, considering VANET is usually implemented in civilian scenarios where locations of vehicles are closely related to drivers, VANET cannot be widely accepted by the public if VANET discloses the privacy information of the drivers, i.e., identity privacy and location privacy. Therefore, security and privacy preservation must be well addressed prior to its wide acceptance. Over the past years, much research has been done on considering VANET's unique characteristics and addressed some security and privacy issues in VANETs; however, little of it has taken the social characteristics of VANET into consideration. In VANETs, vehicles are usually driven in a city environment, and thus we can envision that the mobility of vehicles directly reflects drivers' social preferences and daily tasks, for example, the places where they usually go for shopping or work. Due to these human factors in VANETs, not only the safety related applications but also the non-safety related applications will have some social characteristics. In this thesis, we emphasize VANET's social characteristics and introduce the concept of vehicular social network (VSN), where both the safety and non-safety related applications in VANETs are influenced by human factors including human mobility, human self-interest status, and human preferences. In particular, we carry on research on vehicular delay tolerant networks and infotainment sharing --- two important non-safety related applications of VSN, and address the challenging security and privacy issues related to them. The main contributions are, i) taking the human mobility into consideration, we first propose a novel social based privacy-preserving packet forwarding protocol, called SPRING, for vehicular delay tolerant network, which is characterized by deploying roadside units (RSUs) at high social intersections to assist in packet forwarding. With the help of high-social RSUs, the probability of packet drop is dramatically reduced and as a result high reliability of packet forwarding in vehicular delay tolerant network can be achieved. In addition, the SPRING protocol also achieves conditional privacy preservation and resist most attacks facing vehicular delay tolerant network, such as packet analysis attack, packet tracing attack, and black (grey) hole attacks. Furthermore, based on the ``Sacrificing the Plum Tree for the Peach Tree" --- one of the Thirty-Six Strategies of Ancient China, we also propose a socialspot-based packet forwarding (SPF) protocol for protecting receiver-location privacy, and present an effective pseudonyms changing at social spots strategy, called PCS, to facilitate vehicles to achieve high-level location privacy in vehicular social network; ii) to protect the human factor --- interest preference privacy in vehicular social networks, we propose an efficient privacy-preserving protocol, called FLIP, for vehicles to find like-mined ones on the road, which allows two vehicles sharing the common interest to identify each other and establish a shared session key, and at the same time, protects their interest privacy (IP) from other vehicles who do not share the same interest on the road. To generalize the FLIP protocol, we also propose a lightweight privacy-preserving scalar product computation (PPSPC) protocol, which, compared with the previously reported PPSPC protocols, is more efficient in terms of computation and communication overheads; and iii) to deal with the human factor -- self-interest issue in vehicular delay tolerant network, we propose a practical incentive protocol, called Pi, to stimulate self-interest vehicles to cooperate in forwarding bundle packets. Through the adoption of the proper incentive policies, the proposed Pi protocol can not only improve the whole vehicle delay tolerant network's performance in terms of high delivery ratio and low average delay, but also achieve the fairness among vehicles. The research results of the thesis should be useful to the implementation of secure and privacy-preserving vehicular social networks.