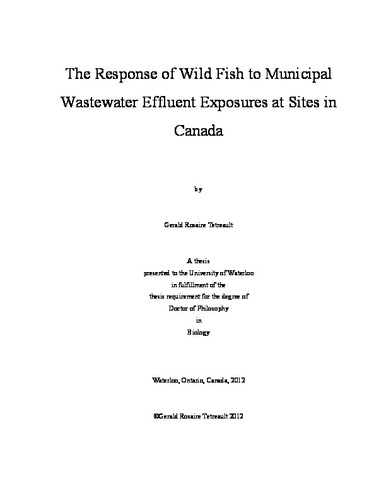 Aquatic receiving environments have long been used to dilute municipal wastewater effluents (MWWE) which are the largest discharge by volume into the aquatic environment in Canada. These treated effluents are a complex mixture of environmental contaminants that includes natural and synthetic hormones, pharmaceuticals, industrial chemicals, nutrients and ammonia. Discharge of MWWE may lead to serious problems in aquatic environments such as eutrophication, hypoxia as well as increased occurrence of disease and toxicity in resident aquatic biota. Reproductive impairment in fish has also been widely reported in association with exposure to wastewaters. Recently, concerns have been raised about the potential for municipal effluents to cause endocrine disruption in fish and other organisms. The effects of MWWE on fish and fish populations in Canada are currently poorly understood. The overall objective of this thesis is to contrast the impact of MWWE discharged into two Canadian rivers on sentinel fish species across levels of biological organization ranging from biochemical responses to changes at the fish community level. Results from these studies support the development of robust effects-based biological monitoring approaches to assess the effectiveness of regulations and remedial actions for minimizing the effects of MWWE. Understanding the temporal changes in physiological and reproductive parameters across the annual cycle of a sentinel species is necessary to optimize biomonitoring programs. The annual variability in terms of survival, reproduction and energy storage in the Greenside Darter (Etheostoma blennioides), a potential sentinel species for the Grand River, Ontario, was documented at a reference site across two years. Variation in energy storage and reproductive development indicated by somatic indices (i.e., relative organ size) and steroid production suggest that biomonitoring can be optimized for this species by sampling in late fall or early spring (pre-spawning). With this new knowledge, field studies conducted with small bodied species, including Rainbow Darter (E. caeruleum), Brook Stickleback (Culaea inconstans) and Fathead Minnow (Pimephales promelas) have demonstrated that, when sampled during the appropriate season (e.g., pre-spawning), they can be used as effective biomonitoring tools to detect fish responses associated with exposure to MWWEs. Two sentinel fish species, Rainbow Darter and Greenside Darter, were then used to examine the impact of two MWWE discharges on fish in the Grand River, Ontario, relative to reference sites in two seasons (fall and early spring). Fish responses, in terms of energy storage (condition factor, liver size), energy utilization (gonadosomatic indices) and reproduction (in vitro sex steroid production, cellular development and intersex) were assessed at each site. Both sentinel species were longer and heavier downstream of the wastewater outfalls. However, these larger fish did not demonstrate consistent increases in condition and liver somatic indices. MWWE-exposed male Rainbow and Greenside Darters had impaired capacity to produce androgens in vitro, lower gonadosomatic indices and altered sperm cell staging. Exposed female fish also had impaired capacity to produce estrogens in vitro, however, they did not demonstrate differences in oocyte development. Male Rainbow and Greenside Darters collected downstream of both MWWE discharges showed increased incidence of intersex (33 - 100%) in contrast to very low occurrences of this condition in upstream agricultural and urban reference sites. This increased incidence of intersex coincided with reductions in gonadosomatic indices and capacity to produce steroids, demonstrating the ability of MWWE to alter the reproductive systems of these fish. The fish communities downstream of the the MWWE outfalls demonstrated differences in abundance, diversity, and species composition when compared to reference sites. MWWE exposed sites had few of the darter species that dominate the fish community at reference sites. More mobile fish species such as suckers (Catostomidae spp.) and sunfish (Centrarchidae spp.) were more common downstream of the outfalls, with occurances becoming more pronounced downstream of the second sewage discharge. Wascana Creek, Saskatchewan, downstream of the wastewater treatment plant for the City of Regina can be up to 100% treated municipal wastewater. Brook Stickleback and Fathead Minnow exhibited delayed spawning and altered gonadal development downstream of the wastewater outfall. Exposed male Fathead Minnows were feminized, having lower expression of secondary sexual characteristics (i.e., loss of nuptial tubercles, dorsal pad, and dorsal fin dot) and induction of the female egg-yolk precursor protein, vitellogenin. Fathead Minnows also showed cellular damage to the gills and kidneys. These responses indicate exposure to a variety of environmental contaminants in the effluent such as ammonia as well as endocrine disruptors. The potential effect of MWWE discharges in these two Canadian watersheds on fish responses was demonstrated across various levels of biological organization including reduced sex steroid production, altered gonadal development, reduction in gonadosomatic indices, delayed spawning, and changes in fish assemblages. An effects-based monitoring approach using sentinel species can be successfully applied to detect changes associated with MWWE outfalls, as long as sampling of sentinel species is conducted during optimal time periods (i.e., when somatic indices are maximized and variability among individuals is minimized). MWWE can impair the reproductive potential of fish beyond a threshold where impacts are expressed at higher levels of organization such as populations or communities. It is essential to make mechanistic linkages between responses at different levels to determine the overall potential impact of effluents on fish. The collection of responses across multiple levels of biological organization can complement and support development of biomonitoring approaches that are focused at the population and community levels such as those being proposed for MWWE in Canada.