Reasonable Assertions: On Norms of Assertion and Why You Don't Need to Know What You're Talking About 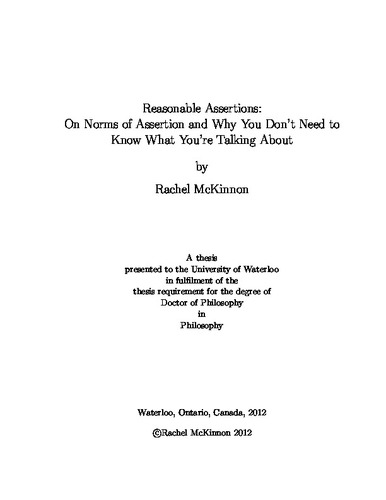 There’s a widespread conviction in the norms of assertion literature that an agent’s asserting something false merits criticism. As Williamson puts it, asserting something false is likened to cheating at the game of assertion. Most writers on the topic have consequently proposed factive norms of assertion – ones on which truth is a necessary condition for the proper performance of an assertion. However, I argue that this view is mistaken. I suggest that we can illuminate the error by introducing a theoretical distinction between the norm of a practice and its goal. In light of this distinction, we can see that proponents of factive norms tend to mistake the goal of a practice for the norm. In making my case, I present an analogy between the norms and goals of placing wagers and the norms and goals of assertion. One may place a bet and lose without being subject to criticism, while one may win and be worthy of criticism. Whether one wins or loses is irrelevant to the normative evaluation of a bet. What is relevant is whether the bet maximizes the bettor's expected value, which is a function of what might be lost, what might be gained, and how likely those prospects are, given the bettor's evidence. Similarly, I argue, whether one's assertion is true or false is not strictly relevant to the normative evaluation of an assertion. What is relevant is whether the speaker has adequate supporting reasons for the assertion, and that the necessary conventional and pragmatic features are present. However, context will determine what count as supportive reasons for a given proposition, what counts as relevant, and what count as conventional and pragmatic elements possessing that relevance. My proposed norm, the Supportive Reasons Norm, is thus sensitive to the context of assertion and shifts from context to context.

Rachel McKinnon (2012). Reasonable Assertions: On Norms of Assertion and Why You Don't Need to Know What You're Talking About. UWSpace. http://hdl.handle.net/10012/6619