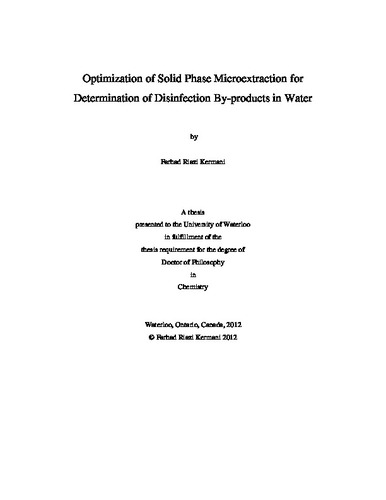 A new technique for sample preparation and trace analysis of organic pollutants in water using mixed-phase thin film (MPTF) devices, combined with direct thermal desorption, cold trapping, gas chromatography-mass spectrometry (GC-MS) is presented for the first time. Two novel analytical devices, Carboxen/polydimethylsiloxane (CAR/PDMS) and polydimethylsiloxane/divinylbenzene (PDMS/DVB) TF samplers were fabricated using spin coating technique and glass wool fabric mesh as substrate. The samplers were easily tailored in size and shape by cutting tools. Good durability and flat-shape stability were observed during extractions and stirring in water. The latter characteristic obviates the need for an extra framed holder for rapid thin film microextraction (TFME) and makes the samplers more robust and user-friendly. The analytical performance of the MPTF devices was satisfactorily illustrated and compared with those of solid phase microextraction (SPME) fibers and PDMS thin film membrane using water samples spiked with seven N–nitrosamines (NAs), known as disinfection by-products (DBPs) in drinking water. Marked enhancement of extraction efficiencies (typically more than one order of magnitude) for the N-nitrosamines, including the hydrophilic ones, was obtained with the MPTF devices under generally pre-equilibrium conditions, compared to the SPME fibers and PDMS thin film membrane. The analytical results obtained in this study, including linearity, repeatability and detection levels at low ng/L for the tested compounds, indicate that the new thin film devices are promising for rapid sampling and sample preparation of trace levels of polar organic pollutants in water with sensitivities higher than SPME fibers and with a wide application range typical of mixed-phase coatings. The user-friendly format and robustness of the novel devices are also advantageous for on-site applications, which is the ultimate use of thin film samplers. Moreover, the thin film fabrication approach developed in this study offers the possibility of making other novel samplers with PDMS or different absorptive polymers such as polyacrylate (PA) and polyethylene glycol (PEG) as particle-free, or as particle-loaded thin films with a variety of adsorptive solid particles. In another development in the course of this research, the performance and accuracy of the SPME fiber approach for sample preparation of selected DBPs were demonstrated and compared with the conventional liquid-liquid extraction (LLE) method by real drinking water samples analysis in collaboration with Health Canada. Four regulated trihalomethanes (THMs) and seven other DBPs known as priority by-products, including four haloacetonitriles, two haloketones and chloropicrin, were analyzed in real samples during two separate comparative studies. In each study, duplicate samples from several water treatment and distribution systems in Canada, collected and stabilized under the same protocol, were analyzed in parallel by two independent labs; in the University of Waterloo by an optimized headspace SPME-GC-MS and in Health Canada by a LLE-GC-ECD (electron capture detection) method equivalent to EPA 551.1. The values for the concentration of the analytes in the samples obtained by the two methods were in good agreement with each other in majority of the cases indicating that SPME affords the promise of a dependable sample preparation technique for rapid DBPs analysis. In particular, it was shown that the SPME fiber approach combined with GC-MS is a fast reliable alternative to the LLE-GC-ECD (EPA 551.1) method for analysis of the regulated THMs in the concentration ranges that are typical and relevant for drinking water samples.