Exploring the Destination Image of China through International Urban Tourism 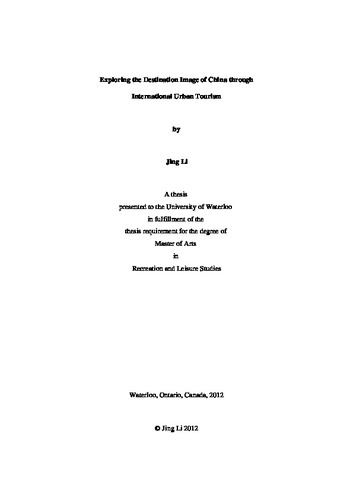 Literature within the tourism discipline emphasized the importance of destination image due to its effect on both supply and demand sides of marketing. Gunn’s seven-stage model illustrated the process and evolution of image formation of a destination has been used as a guiding model in the study. The purpose of this study is to explore the coherence and the difference between pre-conceived images and post-images of China holding by the North American tourists. Purposive sampling was adapted to reach the target participants who fit the study criteria. Qualitative data were collected from eight interviews with participants from Canada and America. Semi-structured interviews with open-ended questions were conducted during October and November 2011. Essences were developed from the analysis of the interview data by conducting initial coding and focused coding. Findings of the study were concluded into three parts: before visiting China; actual travel experiences; and after visiting China. Consistent with Gunn (1972)’s seven-stage theory, findings of the study showed a clear change between pre-conceived images and post-images holding by participants. Images involved from simple, vague, mythical, and stereotypical to comprehensive, realistic, and holistic. Moreover, advantages and problems of the international tourism in China emerged with the progress of data analysis. The findings reflected the perceptions of China in the eyes of North American tourists; consequently, it could contribute to the future tourism practitioners who aim to promote China to be a desirable international tourism destination.