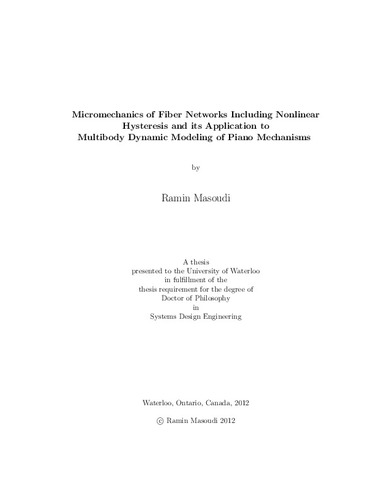 Many engineering applications make use of fiber assemblies under compression. Unfortunately, this compression behavior is difficult to predict, due to nonlinear compliance, hysteresis, and anelasticity. The main objective of this research is to develop an algorithm which is capable of incorporating the microscale features of the fiber network into macroscopic scale applications, particularly the modeling of contact mechanics in multibody systems. In micromechanical approaches, the response of a fiber assembly to an external force is related to the response of basic fiber units as well as the interactions between these units, i.e. the mechanical properties of the constituent fibers and the architecture of the assembly will both have a significant influence on the overall response of the assembly to compressive load schemes. Probabilistic and statistical principles are used to construct the structure of the uniformly-distributed random network. Different micromechanical approaches in modeling felt, as a nonwoven fiber assembly with unique mechanical properties, are explored to gain insight into the key mechanisms that influence its compressive response. Based on the deformation processes and techniques in estimating the number of fiber contacts, three micromechanical models are introduced: (1) constitutive equations for micromechanics of three-dimensional fiberwebs under small strains, in which elongation of the fibers is the key deformation mechanism, adapted for large deformation ranges; (2) micromechanical model based on the rate theory of granular media, in which bending and torsion of fibers are the predominant elemental deformations used to calculate compliances of a particular contact; and (3) a mechanistic model developed using the general deformation theory of the fiber networks with fiber bending at the micro level and a binomial distribution of fiber contacts. A well-established mechanistic model, based on fiber-to-fiber friction at the micro level, is presented for predicting the hysteresis in compression behavior of wool fiberwebs. A novel algorithm is introduced to incorporate a hysteretic micromechanical model - a combination of the mechanistic model with microstructural fiber bending, which uses a binomial distribution of the number of fiber-to-fiber contacts, and the friction-based hysteresis idea - into the contact mechanics of multibody simulations with felt-lined interacting bodies. Considering the realistic case in which a portion of fibers slides, the fiber network can be treated as two subnetworks: one from the fibers with non-sliding contact points, responsible for the elastic response of the network, and the other consisting of fibers that slide, generating irreversible hysteresis phenomenon in the fiberweb compression. A parameter identification is performed to minimize the error between the micromechanical model and the elastic part of the loading-unloading experimental data for felt, then contribution of friction was added to the obtained mechanistic compression-recovery curves. The theoretical framework for constructing a mechanistic multibody dynamic model of a vertical piano action is developed, and its general validity is established using a prototype model. Dynamic equations of motion are derived symbolically for the piano action using a graph-theoretic formulation. The model fidelity is increased by including hammer-string interaction, backcheck wire and hammer shank flexibility, a sophisticated key pivot model, nonlinear models of bridle strap and butt spring, and a novel mathematical contact model. The developed nonlinear hysteretic micromechanical model is used for the hammer-string interaction to affirm the reliability and applicability of the model in general multibody dynamic simulations. In addition, dynamic modeling of a flexible hub-beam system with an eccentric tip mass including nonlinear hysteretic contact is studied. The model represents the mechanical finger of an actuator for a piano key. Achieving a desired finger-key contact force profile that replicates that of a real pianist's finger requires dynamic and vibration analysis of the actuator device. The governing differential equations for the dynamic behavior of the system are derived using Euler-Bernoulli beam theory along with Lagrange's method. To discretize the distributed parameter flexible beam in the model, the finite element method is utilized. Excessive vibration due to the arm flexibility and also the rigid-body oscillations of the arm, especially during the period of key-felt contact, is eliminated utilizing a simple grounded rotational dashpot and a grounded rotational dashpot with a one-sided relation. The effect on vibration behavior attributed to these additional components is demonstrated using the simulated model.