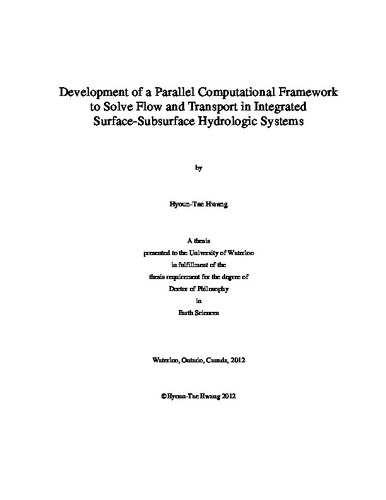 HydroGeoSphere (HGS) is a 3D control-volume finite element hydrologic model describing fully-integrated surface-subsurface water flow and solute and thermal energy transport. Because the model solves tightly-coupled highly-nonlinear partial differential equations, often applied at regional and continental scales (for example, to analyze the impact of climate change on water resources), high performance computing (HPC) is essential. The target parallelization includes the composition of the Jacobian matrix for the iterative linearization method and the sparse-matrix solver, preconditioned BiCGSTAB. The Jacobian matrix assembly is parallelized by using a static scheduling scheme with taking account into data racing conditions, which may occur during the matrix construction. The parallelization of the solver is achieved by partitioning the domain into equal-size sub-domains, with an efficient reordering scheme. The computational flow of the BiCGSTAB solver is also modified to reduce the parallelization overhead and to be suitable for parallel architectures. The parallelized model is tested on several benchmark cases that include linear and nonlinear problems involving various domain sizes and degrees of hydrologic complexity. The performance is evaluated in terms of computational robustness and efficiency, using standard scaling performance measures. Simulation profiling results indicate that the efficiency becomes higher for three situations: 1) with an increasing number of nodes/elements in the mesh because the work load per CPU decreases with increasing the number of nodes, which reduces the relative portion of parallel overhead in total computing time., 2) for increasingly nonlinear transient simulations because this makes the coefficient matrix diagonal dominance, and 3) with domains of irregular geometry that increases condition number. These characteristics are promising for the large-scale analysis of water resource problems that involve integrated surface-subsurface flow regimes. Large-scale real-world simulations illustrate the importance of node reordering, which is associated with the process of the domain partitioning. With node reordering, super-scalarable parallel speedup was obtained when compared to a serial simulation performed with natural node ordering. The results indicate that the number of iterations increases as the number of threads increases due to the increased number of elements in the off-diagonal blocks in the coefficient matrix. In terms of the privatization scheme, the parallel efficiency with privatization was higher than that with the shared scheme for most of simulations performed.