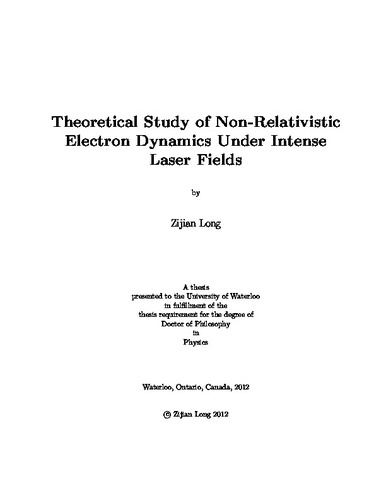 Strong field approximation (SFA) is the most important approximation in the analytical theory of intense laser matter interaction. Based on SFA many analytical theories have been developed such that a broad spectrum of strong field physics phenomena can be described. The central idea of SFA-based theories is to approximate the electron propagation in the continuum by the Gordon-Volkov wavefunction - a well studied analytical solution to the time-dependent Schr\"{o}dinger equation where the electron is driven by the laser field only. This approximation captures some of the essential features of strong-field physics, but at the same time causes several problems in the theory. In this thesis a comprehensive study of the SFA has been presented. We introduce the SFA in both the length gauge and the velocity gauge. The adequacy of SFA has been discussed by comparing the theory to the numerical solution to the time-dependent Schr\"{o}dinger equation (TDSE). The numerical method of solving TDSE is presented as a separate chapter. In order to obtain a better understanding of the applicability of SFA-based theory, we tested the major approximations in the theory by using three different models: the zero-range potential, the hydrogen atom and the hydrogen molecular ion. The accuracy of the method of steepest descent (MSD) and other major approximations in the analytical theory have also been examined. Targeting at the generalization of the SFA-based theories, several extensions and improvements of SFA have been proposed. We will review them in detail and bring them into unity. One of the most successful aspect of the SFA-based theories is to describe and decompose electron dynamics into components such that identification of different physical processes becomes possible. For instance, the direct ionization and non-sequential double ionization bear clear definitions only within the SFA-based framework. The physical interpretation becomes more straight forward due to the fact that there is a close connection between the quantum orbital and classical trajectory. The MSD is a mathematical tool to bridge the quantum orbital and the classical trajectory in an SFA-based theory. We will discuss MSD within a systematic framework so that the higher order asymptotic expansion terms can be obtained in a straight forward way. After gaining substantial understanding of the SFA and the MSD we developed a graphic user interface (GUI) software that is capable of calculating strong field ionization rates, photo-electron spectra and high harmonic generation spectra. The software interface and algorithms have been presented in the thesis. Sample calculations were done and compared with the previously obtained results. In the last chapter of the thesis, we further developed the theory to describe a two-laser ionization scheme where one laser is chosen to be resonantly coupled two real states and the other is a strong few-cycle laser pulse. We demonstrate the periodic dependence of the total ionization on the appearance time of the strong few-cycle laser pulse. In the case of few-cycle pulses with lower intensity, we observed side-bands in the photoelectron spectrum, whose intensity vary periodically with the appearance time of the pulse. We show that our extended theory is able to explain these phenomena adequately.