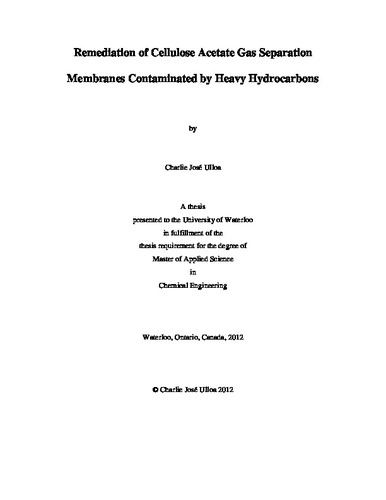 Polymeric membranes have been essential to increasing the efficiency of membrane separation processes. The viability of membrane systems for industrial gas applications lies in the tolerance of such membranes to contamination. While membrane contamination from volatile species can be addressed using purge streams and heat treatment, contamination from non-volatile hydrocarbons can cause a significant decline in membrane permselectivity. This study was focused on the characterization and remediation of cellulose acetate (CA) hollow fibre membranes contaminated by heavy hydrocarbons. CA membranes have a moderate resistance against performance decline from hydrocarbons found in natural gas. Hollow fibre CA membranes were coated with motor oil lubricant to simulate heavy hydrocarbon contamination from large-scale gas compressors and industrial feed streams, and remediation of the CA fibres was conducted using solvent extraction methods. The permeabilities of the membranes to carbon dioxide, helium, hydrogen, methane, nitrogen and oxygen were measured at pressures 300 – 1500kPa and at temperatures 25° – 50°C. It was shown that even a thin layer of oil on the membrane surface can result in substantial losses in membrane performance, with faster permeating gases (e.g. He and H₂) suffering the worst losses. Solvent exchange, in which the membrane was washed using a series of solutions of varying organic content, was unable to remediate the membrane effectively, while the removal of the heavy hydrocarbons by a direct cyclohexane rinse was found to work well to restore the membrane performance.