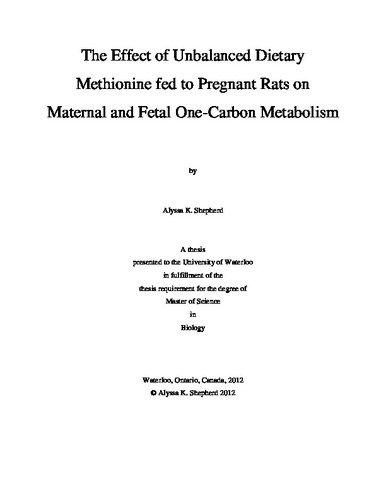 Protein restriction during rodent pregnancy is a well-established model of developmental programming. Although the Southampton low-protein diet model of developmental programming has been accepted to produce hypertensive offspring, the mechanism of this programming remains unclear. Currently the effects of protein restriction in the Southampton low-protein diet are confounded by a relative elevation of the amino acid methionine. The aim of this project was thus to clarify the roles of protein reduction and methionine elevation within this model, especially within the context of amino acid and one-carbon metabolism. Pregnant Wistar rats were fed casein-based diets ad libitum varying in casein (18% or 9%) and methionine content (0.5% or 1.0%) from day 0 through 20 of pregnancy. Two diets exactly replicated the Southampton control and low-protein diets (Con: 18% casein, 0.5% methionine; LP: 9% casein, 0.5% methionine), while a third low-protein high-methionine diet (LP-MET: 9% casein, 1.0% methionine) was employed as a positive control for methionine stress. On day 20 of gestation dams were sacrificed and the feto-placental unit was excised; maternal and fetal blood was collected for HPLC analysis of free amino acids. Maternal plasma was also analyzed for homocysteine content using a spectrophotometric-based enzyme assay. Diet did not affect maternal weight gain, food consumption, litter size or fetal weight. In dams and fetuses, methionine was significantly elevated in both low-protein groups. Maternal homocysteine was significantly elevated only in dams fed the low-protein high-methionine diet. Reductions in maternal serine, proline and glycine levels also occurred in dams fed the low-protein high-methionine diet; fetuses of these dams had significantly reduced levels of all three branch chain amino acids (leucine, isoleucine and valine). Both low-protein diets resulted in drastic reductions in circulating threonine levels in dams and fetuses. Thus, ingestion of low-protein diets with a relative (0.5%) or overt excess (1.0%) of methionine appears to disrupt one-carbon metabolism at the level of homocysteine remethylation to methionine. This may place strain on the folate cycle, as may be indicated by the reduced levels of threonine, serine and glycine. Further testing is necessary to clarify the extent to which folate stores are being utilized for homocysteine remethylation. Increased competition for placental amino acid transport may explain the alternations in circulating free fetal amino acids. Further investigations into levels of other one-carbon metabolites in dams and fetuses are necessary to fully characterize the effect of low-protein high-methionine diets, particularly within the context of the Southampton model of developmental programming.