A Novel Approach for Performance Assessment of Human-Robotic Interaction 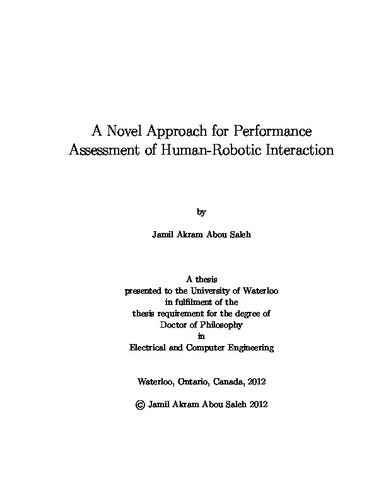 Robots have always been touted as powerful tools that could be used effectively in a number of applications ranging from automation to human-robot interaction. In order for such systems to operate adequately and safely in the real world, they must be able to perceive, and must have abilities of reasoning up to a certain level. Toward this end, performance evaluation metrics are used as important measures. This research work is intended to be a further step toward identifying common metrics for task-oriented human-robot interaction. We believe that within the context of human-robot interaction systems, both humans' and robots' actions and interactions (jointly and independently) can significantly affect the quality of the accomplished task. As such, our goal becomes that of providing a foundation upon which we can assess how well the human and the robot perform as a team. Thus, we propose a generic performance metric to assess the performance of the human-robot team, where one or more robots are involved. Sequential and parallel robot cooperation schemes with varying levels of task dependency are considered, and the proposed performance metric is augmented and extended to accommodate such scenarios. This is supported by some intuitively derived mathematical models and some advanced numerical simulations. To efficiently model such a metric, we propose a two-level fuzzy temporal model to evaluate and estimate the human trust in automation, while collaborating and interacting with robots and machines to complete some tasks. Trust modelling is critical, as it directly influences the interaction time that should be directly and indirectly dedicated toward interacting with the robot. Another fuzzy temporal model is also presented to evaluate the human reliability during interaction time. A significant amount of research work stipulates that system failures are due almost equally to humans as to machines, and therefore, assessing this factor in human-robot interaction systems is crucial. The proposed framework is based on the most recent research work in the areas of human-machine interaction and performance evaluation metrics. The fuzzy knowledge bases are further updated by implementing an application robotic platform where robots and users interact via semi-natural language to achieve tasks with varying levels of complexity and completion rates. User feedback is recorded and used to tune the knowledge base where needed. This work intends to serve as a foundation for further quantitative research to evaluate the performance of the human-robot teams in achievement of collective tasks.