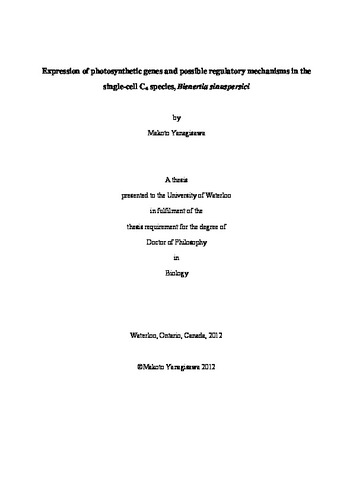 Bienertia sinuspersici is one of three terrestrial plants identified to perform C4 photosynthesis in a single chlorenchyma cell by compartmentation of organelles and photosynthetic enzymes. This thesis describes a study on the distribution of photosynthetic proteins and their corresponding transcripts in an attempt to understand the regulatory mechanisms underlying their differential accumulation in two types of chloroplast. The patterns of photosynthetic enzymes and transcripts accumulation in developing leaves were examined by using immunolocalization and in situ hybridization. The polypeptides of Rubisco large subunit (RbcL) and pyruvate Pi dikinase (PPDK) accumulate equally in all chloroplasts before the formation of two intracellular cytoplasmic compartments: the central (CCC) and peripheral (PCC) cytoplasmic compartment. The differential accumulation of these enzymes is not completed until the mature stage, indicating that the transition from C3 to C4 photosynthesis occurs at the very late stage of leaf development. In mature chlorenchyma cells, RbcL accumulates 20-fold more in the CCC than in the PCC while PPDK demonstrates a concentration gradient that is lowest in chloroplasts in the center of the CCC and highest in the PCC chloroplasts. The pattern of rbcL transcript accumulation follows that of its polypeptides in developing leaves, suggesting the expression of this gene is controlled at the transcriptional and/or mRNA stability level. The quantitative real-time PCR results of rbcL transcripts from isolated chloroplasts of each compartment further supported this observation. Bioinformatics tools were used to predict possible structual motifs on rbcL mRNA as an attempt to speculate on their role in its distribution and identify the presence of secondary structures in the 5’ untranslated region (UTR) that may function in the regulation of gene expression. Detailed examination of the ultrastructure of the unique intracellular organization in the single-cell C4 system showed various vesicles in close proximity to chloroplasts in both compartments in mature chlorenchyma cells of B. sinuspersici under H2O2 treatments. To further understand the biogenesis of these vesicles, imunolocalization and transient expression of green fluorescent protein (GFP) experiments were performed. These studies identified stroma-filled tubules (stromules) as the structure that participates in the formation of sequestering vesicles (autophagosomes) containing cytosol and organelles. Fluorescent microscopic analyses using autophagosome-specific and autophagic vacuole markers only showed partial overlapping of two fluorescent signals. These results suggest that the formation of autophagosome and autophagic vacuole occur independently. The contribution of stromules to autophagosome formation and the involvement of chloroplastic envelopes in this process provide another level of regulation in the compartmentation of photosynthetic enzymes in single-cell C4 system. Collectively, the findings in this thesis enhance our overall understanding on the development and function of single-cell C4 photosynthesis.