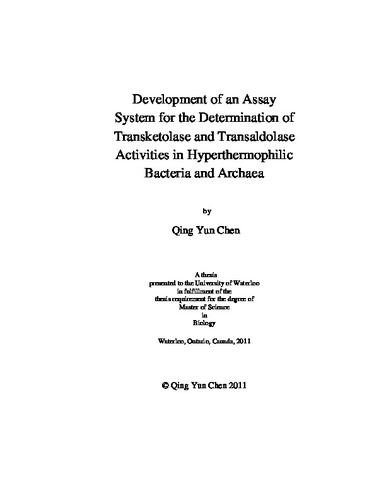 Only a few hyperthermophilic archaea are found to have a complete nonoxidative stage of pentose phosphate pathway (NOPPP), which indicates that most archaeal hyperthermophiles are partially missing pentose metabolizing enzymes. However, very limited research has been done in this interesting field. Although few hyperthermophilic enzymes in PPP have been studied in detail, the enzymatic activities reported previously were underestimated because assays were performed at temperatures much lower than 80°C. The commercially available auxiliary enzymes used in those assays were not thermostable, which limited assay temperature as well. The substrates used in those assays are extremely expensive, which is another factor limiting the study in this area. In this project, an inexpensive and accurate assay system was developed to overcome these limitations. Genes encoding several auxiliary enzymes for PPP enzyme assays were cloned from selected hyperthermophiles and overexpressed in E.coli Rossetta2 TM (DE3). These enzymes were glyceraldehydes-3-phosphate dehydrogenase from Thermotoga maritima (TmGAPDH), triosephosphate isomerase from Pyrococcus furiosus (PfTIM), glycerophosphate dehydrogenase from Pyrococcus furiosus (PfG3PDH) and Aeropyrum pernixK1 (ApG1PDH), transketolase from T. maritima (TmTK), xylose isomerase from T. maritima (TmXI) and Thermotoga neapolitana (TpXI), and xylulose kinase from T. maritima (TmXuK). Their activities were determined under anaerobic conditions at 80° iv C in both cell free extracts and for purified enzymes. The assay system contained the following parts: A) TmGAPDH, TmXI or TpXI, TmXuK (TmTK), PfTIM, and PfG3PDH or ApG1PDH as auxiliary enzymes for TK (XuK) assay; B) TmGAPDH, PfTIM, and PfG3PDH or ApG1PDH for transaldolase (TAL) assay. D-xylose, instead of the traditional assay substrate xylulose-5-phosphate (xylulose), was used as the substrate in this assay system for the determination of TK (XuK) activity. The activities of XuK, TK, and TAL were also determined in several hyperthermophilic bacteria and archaea. All enzymes served as paradigms to prove the feasibility of using the new assay system for other hyperthermophilic PPP enzymes. The species of hyperthermophiles used in this study were T. maritima, P. furiosus, Thermococcus guaymasensis, T. neapolitana, Thermotoga hypogea and T. petrophila. Two different methods were tested for the TAL assay (part B), with either TmGAPDH or PfTIM plus TmG3PDH as the auxiliary enzymes. Similar characteristics were obtained using both methods. The existence of TAL in all selected hyperthermophiles might indicate that the existence of the PPP is functioning among them. The XuK assays in selected hyperthermophiles were successfully conducted using the new assay system (part A). T. petrophila showed the highest XuK activity (0.3 U/mg), indicating the feasibility of the assay system’s application in the determination of hyperthermophilic PPP enzymes at high temperatures (80°C). TmTK activity may also be determined using the new assay system if the auxiliary enzyme XuK activity would be higher. Therefore, the new assay system developed in this project demonstrates dual functions for both XuK and TK assays in hyperthermophiles.

Qing Yun Chen (2012). Development of an Assay System for the Determination of Transketolase and Transaldolase Activities in Hyperthermophilic Bacteria and Archaea. UWSpace. http://hdl.handle.net/10012/6579