Elements of the Gothic in the Works of Judith Thompson 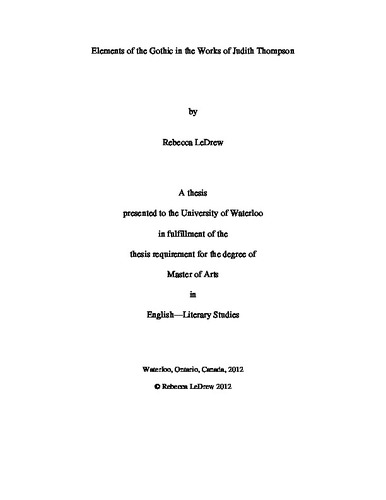 This thesis is an examination of the Gothic elements present in a selection of works by Canadian playwright Judith Thompson. The Gothic genre is marked by continual flux and adaptation, ensuring that its ability to inspire terror, as well as its relevance as a form of cultural critique, remains undiminished. Gothic texts seek to uncover the anxieties and uncertainties that societies would prefer to repress, and then forcing a confrontation with those elements. Frequently this pattern of repression and return takes the form of various kinds of hauntings, as well as the monstrous. As this emphasis on the “return of the repressed” would suggest, psychoanalysis will figure prominently in my analysis of Thompson’s work and is woven throughout the four chapters. Chapter One concentrates on establishing a working definition of the Gothic, its history and development, and the three subcategories of the genre that I will be focusing on in the subsequent chapters: the postmodern Gothic, the feminist Gothic and the Canadian Gothic. All three Gothic subgenres share their affinity for translating late twentieth-century anxieties into the language of the Gothic. They also share a resistance to closure or solutions of any kind, even if such solutions would seem to be advantageous to the author’s putative ideological stance. The works by Thompson I have chosen evidence her preoccupation with postmodern, feminist and contemporary Canadian concerns. She expresses these concerns in a unique style that blends contemporary literary techniques with the more timeless elements of the Gothic tradition.