The distribution of Dreissena and other benthic invertebrates in Lake Erie, 2002. 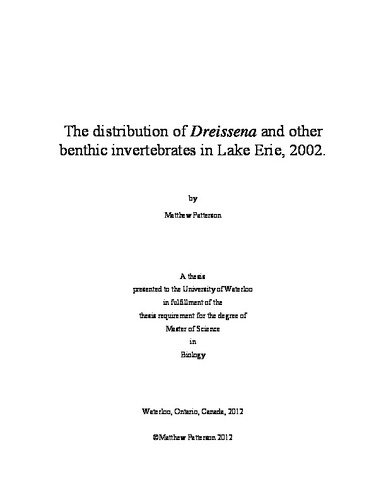 A lake-wide benthic survey of Lake Erie during summer 2002 indicated that Dreissena bugensis is the dominant dreissenid in Lake Erie, especially in the east basin where this species was found at every station but no Dreissena polymorpha were collected. Mean (±SD) densities of dreissenid mussels were comparable between the west (601±2,110/m2,n=49) and central (635±1,293/m2; n=41) basins, but were much greater in the east basin (9,480±11,173/m2;n=17). The greater variability in mussel density among stations and replicate samples in the central and west basins than in the east basin is attributable to the preponderance of fine-grained substrata in the nearshore, higher episodic rates of sediment deposition and periodic hypoxia in bottom waters. Although there was little change in lake-wide mean dreissenid densities between 1992 and 2002 (declining from ca. 2,636 individuals/m2 to 2,025 individuals/m2), basin-averaged shell-free dry tissue mass increased by almost four-fold from ca. 6.8±15.6 g /m2 to 24.7±71.3 g/m2 in the same interval. Up to 90% of this biomass is in the eastern basin. Other changes in 2002 include the virtual absence of mussels in the 3 to 12 mm size range, probably because of predation by round gobies, and an increase in the average size of mature mussels. The substantial changes observed between 1992 and 2002 suggest that dreissenid populations in Lake Erie were still changing rapidly in abundance and biomass, as well as species composition. The results of this survey suggest that a direct link between Dreissena spp. and hypolimnetic hypoxia in the central basin is unlikely. The dominant organisms of Lake Erie in 2002 were D. rostriformis bugensis (38%), Oligochaeta (33%), Chironomidae (18%), Sphaeriidae (2.7%), Amphipoda (2.3%) and Hydrozoa (2.2%). Mean invertebrate density was greater in the east basin, especially on hard substrates, than either the west or central basin. In the central basin, sites ≥5m supported greater numbers of organisms, than shallow (≤2m) sites in the nearshore wave zone. The greatest number of taxa were observed in the central basin, likely a resutlt of greater sampling effort there. Gammarus fasciatus comprised 80% of all amphipods, being most abundant on Dreissena-dominated hard substrates in the east basin. The introduced species, Echinogammarus ischnus occured at only 11 of 69 sites, and was the only amphipod found at 4 east basin sites, but at relatively low densities. Diporeia were not found in our survey. Hexagenia was collected at only 4 stations, all in the west basin. Chironomids were dominated by Tanytarsus and Chironomus, with Procladius, Dicrotendipes and Polypedilum also being relatively common. Oligochaete Trophic Index for 2002 indicates a similarly mesotrophic condition throughout the lake and marginal nutrient enrichment of sediments between years 1979-2002. Multivariate ordination of community data indicates clear separation of sites by year and basin as expected given the extirpation of Diporeia and the introduction of Dreissena and E. ischnus, but also reveals subtle changes in benthic structure over the last 2 decades. The benthic community of Lake Erie in 2002 does not likely represent an equilibrium condition.